‘$2m worth of filth’ - NSWMA issues Christmas warning to litterbugs 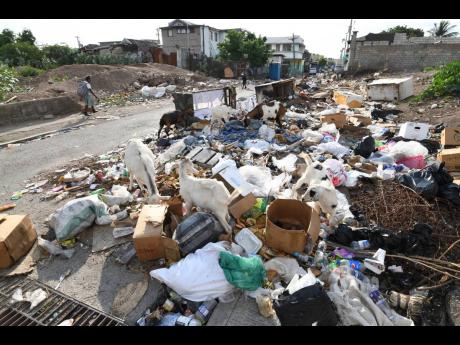 Ricardo Makyn
Garbage piled up at an intersection in Kingston earlier this month.

Almost $2 million worth of litter tickets have been issued to Jamaicans across the island, as the National Solid Waste Management Authority (NSWMA) prepares for an increase in unsightly dumping sites islandwide during the upcoming Christmas season.

Up to the end of October, 1,230 litter tickets were issued to the public, amounting to $1.6 million. Last year, the NSWMA issued 1,542 tickets, amounting to approximately $1.9 million.

The fines range from $2,000 to $10,000, depending on the severity of the offence committed, and the NSWMA says that it will be bolstering its anti-litter enforcement for the last weeks of 2019.

At least three St Thomas companies were taken to court by the state agency this year for illegally dumping commercial waste in that parish. In other cases, tickets went unpaid and warrants have been made for the offenders’ arrests.

“People need to take into consideration their disposal practices, not only at their residence, but also while they are in the public space. People need to be mindful of how and where people deposit their waste. It would be easier on everyone,” said Dominique McKnight, compliance enforcement and security director at the NSWMA.

“We will be out in our numbers as early in the morning as we can for the months of November, December, and January, and we will be looking out for persons who would be in breach of the NSWMA Act. We are going to prosecute where necessary,” continued McKnight.

According to McKnight, there are more than 300 illegal dumping sites across the island, and most of them are located in inner-city and commercial spaces in Kingston and St Andrew.

He listed sections of Collie Smith Drive, Old Hope Road, Oxford Road, in the vicinity of the Half-Way Tree Fire Station, and Molynes Road, among the areas most affected in the Corporate Area.

Communities such as Arnett Gardens, which suffer from irregular garbage pick-ups, are also among some of the perpetrators, but McKnight said that the NSWMA has been working with outside entities such as the Jamaica Social Investment Fund (JSIF) to address the garbage challenges in these communities.

Last week, NSWMA Executive Director Audley Gordon noted that the proliferation of illegal dump sites across the island severely affects operations and the service provided to the wider public.

“The main challenges are that it puts an extra burden on the crew, which has to go around and spend long times cleaning up the mess. We do not have the trucks or the fuel to divert our trucks to clean up these areas, and it deprives other communities of the services,” he said.

“On top of that, it is aesthetically unsightly, it encourages rodents and flies and contributes to the backlog,” he told The Sunday Gleaner, after posting a video of one such dumping site being cleaned in Manchester.

The NSWMA said that it spent $29,439 million for fuel in all regions for the month of October. The majority of the funds were spent in Clarendon, Manchester, and St Elizabeth. The trucks reportedly work longer hours in those parishes.

While biodegradable garbage such as coconut shells and sugarcane trash made up a large percentage of such dumping sites, McKnight said that household waste such as old appliances are still major issues.

McKnight’s warning came as the NSWMA announced a slew of efforts aimed at bolstering garbage collection across the island. The measures include increasing the fines for littering.