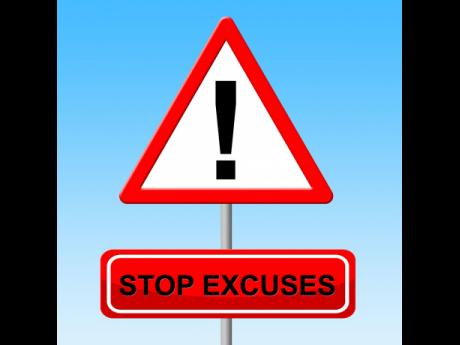 It seems today that we are consumed with the concept of ‘living our best lives’ and #goals. However, in order to truly grasp the opportunities God gives us for growth and prosperity, we need to quit bad habits and let go of unhealthy attitudes that have kept us trapped for many years. What often stops us from changing is the excuses we make.

We can come up with all kinds of excuses to explain why we haven’t been our best and why we can’t move forward. The human mind has such an uncanny ability to rationalise anything that if we’re looking for a way to get out of what we should be doing, we’ll find it.

In Exodus 3, God called Moses to help deliver the Israelites from the bondage of slavery to the Egyptians. Moses made many excuses before submitting and obeying. If Moses had continued this rather than stepping out in faith, he would never had realised his true, God-given, potential. Moses was destined to be Israel’s greatest prophet. Deuteronomy 34:10 NLT says, “There has never been another prophet in Israel like Moses, whom the Lord knew face to face.” Moses made history and so can you, but we need to quit making excuses. Our first step to QUIT is to realise why we hide behind these excuses.

1. A main reason that we make excuses is because we are afraid of the responsibility that will come with change. We don’t want to fail; so, we make up a reason to stay right where we are.

2. We also make excuses to get ourselves out of trouble. So, we place the blame on others or on our circumstances.

3. Often when we have personal problems that God wants to fix, we make excuses to stay in denial about what is wrong.

4. And, of course, we make up excuses to keep from doing what we just don’t want to do.

Excuses are the nails used to build a house of failure. Let’s consider a few things that might persuade us to stop making excuses.

When I make excuses it:

1. Hinders me from seeing opportunities

Excuses cause us to become focused on why you can’t instead of how you can. It’s like the 10 of the 12 spies sent into Canaan’s Land in Numbers 13 who did not believe that the Israelites could conquer the people. “The people are strong, the cities are fortified and very large … and we became like grasshoppers in our own sight” (Num. 13:28, 33). Their excuses blinded them to the power of God and kept them from experiencing the Promised Land.

2. Turns me into a victim instead of a victor

Our excuses surrender our God-given victory and gives us permission to not be different. Ninety-nine per cent of the failures come from people who have the habit of making excuses. (George Washington Carver)

3. Encourages a lack of faith

In Judges 6, Gideon was called a valiant warrior of God and was given the challenge to lead God’s people out of oppressions and defeat against the Midianites. But when he was given his mission, he began making excuses, instead of standing in faith in what God said.

When Moses made all the excuses before God, “the anger of the Lord was kindled against Moses” (Exodus 4:14 NKJV). God has given us everything we need for this life so when we make excuses, it is an insult to His power, His character and His promises.

Living our best life is possible and it is just on the other side of breaking destructive habits like making excuses today. We will discuss exactly how to do this next week.