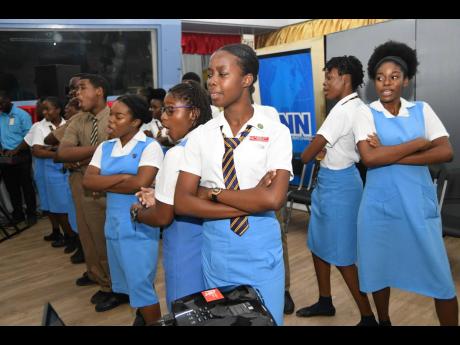 Ardenne High School, with a push from the school’s dean of discipline, The Reverend Mario Samuels, and Principal Nadine Molloy, created a summer intervention programme in 2014 to assist students who were having challenges, behavioural and otherwise.

Now in its fifth year, the school’s summer intervention programme has partnered with the RJRGLEANER Communications Group to create a more lasting effort, dubbed the RJRGLEANER/Ardenne High School Mentorship/Internship Programme, which was launched last Wednesday at RJR Broadcast House.

Samuels said that he developed the desire to impact students as a result of his own past experiences.

“Coming to Ardenne seven years ago, there was one thing on my mind, and that is to make an impact. How many lives would I be able to touch and transform? This had to be my mandate as I had an intimate understanding of my own past; a past characterised by my own failures. There was a great light on the horizon as I interacted with persons who showed me a better path. The process was long, but eventually change happened,” Samuels said.

He went on to explain that being employed at the school gave him the perfect opportunity to pass on what he learnt and, after a year, the summer intervention programme was born.

“In 2014, after observing and assessing, I brought a proposal to [the principal] about a summer intervention programme. The purpose of this programme was to effect change,” he said.

RJR was one of the places visited by the students and, after consideration, the administration from the RJRGLEANER Communications Group decided to develop a more sustained programme, adding another arm of benefit in the form of an internship programme.

“I had a check this morning, we have more than 30 disciplines at work in our organisation and we are saying to you, if you are interested in understanding those areas so that you can make choices about where you want to go professionally, explore them with us and allow us to give you a sense of what could make you get your true potential out and make you as great as you can be,” Allen implored the students at the launch.

Molloy celebrated the launch, noting that it built on a programme that was started from humble desires and now has the possibility of reaching and impacting even more students on a larger scale.