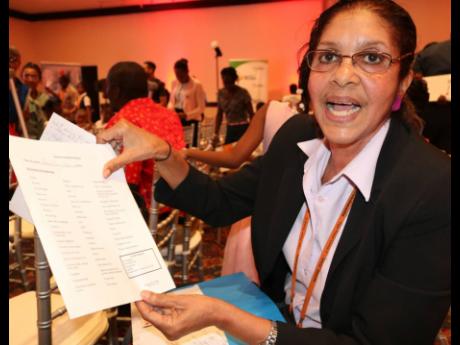 Nutrition specialist Patricia Thompson has taken issue with phase five of the Ministry of Health and Wellness’ ‘What’s in Our Food’ mass media campaign for the reason that it fails to educate the public on nutrition, which would help them to better utilise the information provided.

She argues that the facts on food provided throughout the campaign fails to help the population with information on how to improve their general nutritional intake.

“So I hear the National Food Industry Task Force saying that they do nutrient-centred strategies, but I only heard food-centred strategies, and food does not equate to nutrition. Food is outside the body, nutrition takes place inside. So who guides the process of getting the food from the meals and the snacks into the bodies in the way that’s going to benefit the population?”

Thompson, a registered nutritionist and executive director of Jamaican Island Nutrition Network, was speaking to The Gleaner followng last Thursday’s launch of The Heart Foundation of Jamaica’s campaign at The Jamacia Pegasus hotel in New Kignston.

“A healthy food is defined by the Food and Drug Administration in the United States as any food that, in addition to calories, has at least 10 per cent of at least one nutrient. Most of our juices have a hundred per cent of vitamin C added, which means that by the definition of that entity, all our juices are healthy foods,” she pointed out.

Thompson argued further that the approach taken by the national campaign is outdated, harking back to the 1980s.

“It is from a ‘don’t eat era’. Don’t eat sugar, don’t eat fat, don’t eat this, don’t eat that. The problem the population is having is what do we eat?”

Unaware of what to eat

To support her point, Thompson showed The Gleaner a list of foods given to patients who had sought help from health professionals in making the correct choices, with the aim of losing weight.

“The poor lady is confused as to what to eat. She is getting fatter and fatter despite all of this ‘don’t eats’ which is provided by the hospital, doctors and nurses she has interact with ... . Why? Because she doesn’t know what to eat!”

Instead of employing nutritionists and dietitians to guide the process for the general population, the Ministry of Health and Wellness has taken the easy way out by trying to get every member of the public to become a nutritionist.

“We forget that what we should be sending is the message to consult your qualified nutritional professional so that they can guide you by way of an individual assessment, which is personalised to meet your specific needs. So while I applaud the efforts to do the job of the nutritionist, I would applaud even more if we would employ the nutritionist to come and do their jobs themselves.”