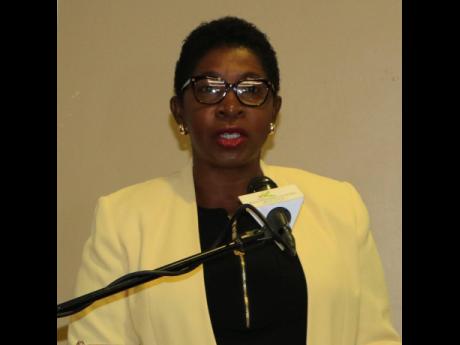 Christopher Serju
Operations officer of the World Bank Group, Karlene Francis, explains why building resilience to natural disasters and climate change is a key policy challenge for the Caribbean. She was attending Wednesday’s launch of a World Bank report in New Kingston.

Jamaica has been rewarded for its progress in building resilience to climate change, which has been a big challenge for Caribbean countries that have seen increased frequency and intensity of natural disasters.

This was announced Wednesday by Karlene C. Francis, operations officer for finance, competitiveness and innovation global practice with the World Bank Group, during the launch of the bank’s report Forces of Nature: Assessment and Economic Valuation of Coastal Protection Services Provided by Mangroves in Jamaica.

Addressing an audience at Knutsford Court Hotel in New Kingston, Francis said that in December 2018, the World Bank provided additional funding of US$140 million to support fiscal resilience and growth, as well as enhancing social-safety nets. Further to this, in October 2019, the World Bank’s Global Risk Financing Facility awarded a grant of US$15 million to assist Jamaica to improve financial ­protection against climate and natural disasters.

“Given the economic progress made by Jamaica under the joint IMF-World Bank-IDB programme and the fact that Jamaica has built fiscal resilience, the World Bank thought it prudent to provide additional funding to Jamaica ... .

“Based on the economic progress, we also realised that it’s a good partnership, which is also borne out by the fact that the policies have been implemented across successive political administrations,” Francis told The Gleaner.

The World Bank official was making reference to Jamaica’s successful multi-year economic-reform agreements with the International Monetary Fund, which spanned the Simpson Miller and Holness administrations. The reforms have reined in debt and led to improved fiscal performance.

Earlier in her presentation, the World Bank representative declared that the gains in the coastal protection of mangroves achieved by Jamaica are consistent with the bank’s focus on building social and climate resilience.

Francis also noted that the Forces of Nature report shows that mangroves offer significant benefits of flood risk reduction and fisheries production, among other advantages. It also identifies key areas affected by floods in which mangrove management may yield the greatest returns.

“This study supports the ­growing interest within the development agenda, to include nature-based ­solutions for disaster risk ­management, and provides vital information for discussion on ­climate-change ­adaptation, insurance, and ­conservation,” she concluded.