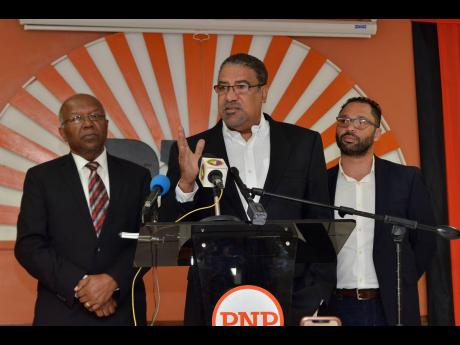 Health and Wellness Minister Dr Christopher Tufton has come under fire for his handling of the spiralling dengue fever epidemic, with Opposition People’s National Party (PNP) representatives casting him as untrustworthy and demanding that he be relieved of the portfolio.

According to Guy, the minister reported in Parliament on October 8, 2019, that there were 135 suspected and confirmed dengue-related deaths for the 20 months ending September 30, compared to 47 in 2018 and 88 on in 2019. Ten of these occurred in September.

The double-speak continued, the opposition spokesperson said, with the minister’s declaration that as at August 29, there were 4,409 suspected, presumed, or confirmed dengue cases for 2019, rising to 5,909 by the end of September.

Citing data for Manchester and Hanover as well, Guy contended that contradictory information out of the health ministry had helped to cause chaos and uncertainty.

“The minister denied in February that there was an epidemic [and] refuted that there was a need to get more funds in October, as proposed by the Opposition, as he said he had enough funds from the National Health Fund to do what was necessary up to December 2019 to contain the epidemic,” he said.

Guy added: “Yet in November, with the rapid increase in the numbers that were diagnosed and the rising deaths, a billion dollars has to be spent on mitigation programmes. ... Many of the children who lost their lives might have been alive today.”

The PNP spokesmen was alluding to Prime Minister Andrew Holness’ announcement of $1 billion towards a dengue-mitigation clean-up campaign.

“We want him to go,” Guy told The Gleaner after yesterday’s press briefing.

“It is our considered view that the minister is more concerned about public relations than actual health and wellness.”