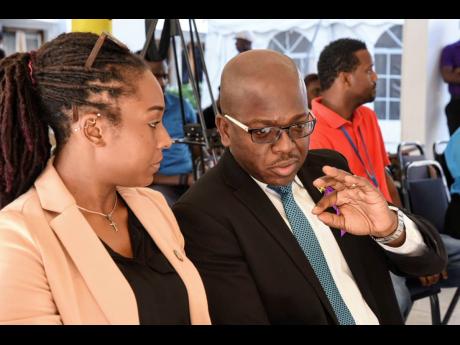 Contributed
Minister without Portfolio in the Ministry of Economic Growth and Job Creation, Senator Pearnel Charles Jr (right), in discussion with Director and Founder of the Jamaica Climate Change Youth Council, Eleanor Terrelonge, during the University of the West Indies (UWI) Mona Guild Climate Action Conference 2019 Project Plan, held at the university’s St Andrew campus, on November 29. The forum was hosted by the UWI Mona Guild External Affairs Committee.

Minister without Portfolio in the Ministry of Economic Growth and Job Creation, Senator Pearnel Charles Jr, has said youth empowerment and engagement is critical in reducing the impact of climate change and raising awareness about the issue.

Speaking at University of the West Indies (UWI) Mona Guild Climate Action Conference 2019 Project Plan, at the campus, on November 29, the minister said this will equip young people with the requisite skills and knowledge to take climate action and to guide them in becoming the future leaders of a safe and sustainable world.

“If we don’t, then the difficulty is that we will very soon see more than 80 per cent of our residential and commercial activities that are on the coast moving further inland. The impact for us as a small island developing state is even more exacerbating,” he said.

Senator Charles, who is also an executive member of the Jamaica National Commission for UNESCO and serves as the Chairman of the UNESCO Youth Advisory Committee, said several youth across the country are engaged on a number of initiatives to boost youth engagement and participation in addressing climate change.

He said the initiatives include coastal clean-up day and a national tree-planting project.

UNESCO is one of the main responders to the call for climate action to reverse and limit the impacts of what seems to be an impending climate crisis.

“What we saw is that the youngsters from the school and their teachers have now adopted programmes in their schools. The youngsters from the HOPE and HEART programme that came to work with us are now engaged and want to become volunteers next year to continue the progress and the work in relation to climate action,” the Minister said.

Meanwhile, he challenged the UWI Guild to “come up with the kind of practical and relevant activities that are going to show that you are not just talking about it, but you are putting in place sustainable ways to contribute to the development of this nation’s capacity to withstand the impacts of climate change.”

Senator Charles also said the ministry recently launched the Water IQ Initiative (WIQI), which is a joint conservation campaign that aims to raise awareness among students about the importance of water management in light of the recurring water shortages exacerbated by climate change.

“This initiative is going to raise awareness of the students, so they can become the standard-bearers to really speak about water use efficiency,” he said.

The forum was hosted by the UWI Mona Guild External Affairs Committee.