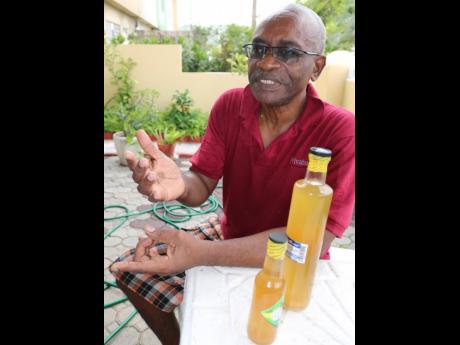 Photo by Christopher Serju
Businessman Clyde Johnson speaks about the hardships he has had in collecting payment for his moringa wine, which has found favour with locals and foreigners alike.

Retired technical drawing teacher Clyde Johnson thought that he had found the formula for success when he chanced upon a recipe for moringa wine with healthful benefits such as libido boost and blood-pressure control, in addition to other health positives.

Now, the businessman is struggling to keep his fledgling business afloat because of dealers who take the product on consignment and skip out on paying in what has become almost a cyclical nightmare.

During a chat at his Westmeade, St Catherine, home on Monday, Johnson reeled off tales of woe about the inability to collect on a potentially great business, which, ironically, had its genesis in his ill health, and for which he owes his wife a debt of gratitude.

“I wasn’t keeping good health. Every minute, I was at the doctor,” he disclosed.

At school, he would set lesson plans and sit at his desk to await the completion of their assignments by the students who invariably had to awaken him.

“I would find myself ‘bucking’, always falling asleep, and the students would say, ‘Sir, what happen to you? You nuh get nuh sleep last night?’ It was hard to stay awake.”

Things changed for the better when his wife introduced him to moringa seeds. The memory of what happened when he ingested them is still fresh in Johnson’s mind.

“I chew up about three seeds and swallow, and then I had to drink about three cups of water to get the bittersweet taste out of my mouth,” he told The Gleaner.

Despite this experience, at his wife’s gentle urging, the retired teacher continued to take the seeds but opted not to chew them. Instead, he pressed them flat before swallowing.

Over time, he noticed that his bowel and urine flow had improved, as well as his sex drive.

“The thing give a different vibes in every way,“ he disclosed.

“When I hear people talking about this thing and saying it might be foolishness, I can testify to the effectiveness. The doctor not seeing me much again because me have high blood pressure, and now, me taking the moringa seed with the prescription and find that my pressure is 119 over 79, and when I go the doctor, him say my pressure is good.”

Realising the potency and potential of the moringa seeds, after researching winemaking on YouTube, Johnson pulled on three processes, which he combined and tweaked to arrive at his final formula. Now, he is preparing to launch a new flavour – moringinga (pronounced MO-RIN-JINJA), a ginger-infused mix.

However, he will have to find a way to collect outstanding debts and fine-tune his distribution system to stem the financial drain on his pocket.

“I realise now that I just have to find different ways to do business because I am losing. Right now, it’s over $150,000 owed to me, money that is urgently needed to advance the business,” he admitted.

After constructing a workshop to store the wine over the fermentation period and allow for further processing, Johnson applied to the Ministry of Health, which inspected the premises before certifying it. He had the Bureau of Standards Jamaica (BSJ) carry out tests, and so he will be able to state the alcohol and sugar content on the product’s nutrition panel.

The businessman said that when he applied to JAMPRO for permission to export, given the interest from Canadian and American clients, he was told that the BSJ would need to run a full gamut of tests, the results of which would inform a comprehensive nutrition panel. This cost, while prohibitive, would be affordable if the turnover from the business was being realised, he said.

From a woman in Riverton City who told him how well it sold and whom he had to threaten with a lawsuit before recovering some of the money to the civil servant who took three months to pay and whose colleague was so impressed, he went into business for himself as a subdealer, the stories of disappointment are unending.

“Nine out of 10 people who taste the wine give me a good review, and I have steady customers, but the bad ones outnumber them by far. One man came and purchased four boxes within two weeks came back to say he wanted to purchase on consignment. I warned him that I was not so inclined based on my experiences.

By the time he should have repaid me, the man stopped taking my calls, and I had to report the matter to his supervisors before he paid me,” Johnson said.

Now that he is venturing into the new flavour, moringinga, Johnson is hopeful that this new twist will bring a change of fortunes for him.