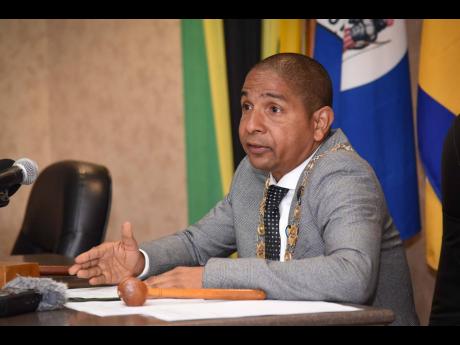 Mayor of Kingston Delroy Williams is advocating a cautionary approach to the Port Royal cruise ship pier development in which the Port Authority of Jamaica (PAJ) is investing about US$40 million, inclusive of the cost of the SeaWalk floating pier, a cruise terminal, restoration of Fort Charles, a museum and a live archaeological dig.

Addressing Tuesday’s monthly meeting of the Kingston and St Andrew Municipal Council (KSAMC) at 24 Church Street, downtown Kingston, Williams said he was looking forward to the first cruise ship call next Monday, but warned against excluding residents of the peninsula from any economic gains.

“We look forward to the cruise ship arrival. This must be a major achievement. It’s just a start. (Good) things can happen, so we have to be very careful in our approach and in pursuing this stopover. From our municipal standpoint we have to be very careful in how we pursue this, mindful of our approach and ensuring that we integrate the residents of Port Royal into these developments and to ensure that they benefit,” he warned.

He went on to commend the Government for its careful approach in dotting the ‘I’s and crossing the it’s in ensuring that no one is left behind, and commended Lorraine Dobson, councillor for the Springfield division in the East Kingston and Port Royal constituency, for her continued vigilance on the matter, charging her to keep it up.

“Just ensure that you continue to be vigilant … to ensure that the decisions taken are in the interest of the community.”

Speaking with The Gleaner afterwards, Dobson declared that her interest was as councillor and long-time resident of the seaport town and so, while she shared the mayor’s concern, it was for different reasons.

Dobson explained that she was not opposed to any kind of development because Port Royal was in dire need of economic activity.

“I have it said time and again that you don’t pass Port Royal going anywhere. So you have to be coming there, which means that you have to create economic gains for the people.”

It is for this reason why the councillor welcomes investments based on sustainable development plans, and so she is questioning the rationale behind the cruise ship pier, given the historic town’s delicate ecological and environmental frameworks. She also questioned the balance between the dilapidated town and the 21st-century demands that are forced on it.

Dobson explained that residents have long been warned against any significant construction or development work, for fear of disrupting the historical or delicate ecological framework. Now comes a significant development, unmindful of these concerns when nothing about Port Royal had changed in centuries.

For the councillor, this smacks of hypocrisy.

“We were continuously warned about, ‘you can’t do this’, ‘can’t move that’ because the natural environment is too delicate. So for years certain developments could not happen, but suddenly all this has changed, without any fundamental change in Port Royal.”

Her immediate concern is the impact the demand for drinking water will put on the age-old system in the town.

“The concretion within the pipes alone cut down the flow of water, no matter how much come in through those pipes. Now a cruise ship must put some form of pressure on that and, not only water, other resources whether it is electricity, sewage, etc. They putting up a sewerage treatment plant to facilitate the pier but they told us that it will be big enough for the town to tie into eventually.”

A major worry for Dobson and other residents of Port Royal is that developments of the cruise ship pier continue to fast outpace the meagre investments planned for the town, and wonder how the PAJ will meet the increased demand for entertainment, food and other seasonal increases if the town continues to be neglected.