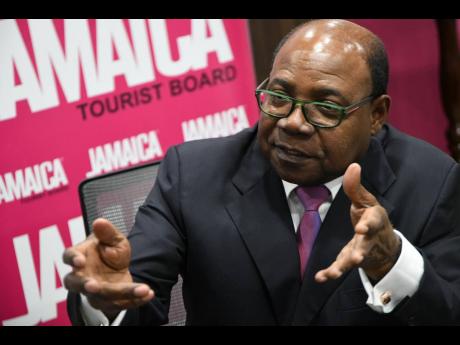 Strategies for coping with natural disasters and enhancing resilience to speed up recovery, with the capacity to build back better where necessary, are expected to dominate discussions at the United Nations World Tourism Organisation (UNWTO) to be held at the Montego Bay Convention Centre, in Rose hall, St James, from May 28 to 29.

Minister of Tourism Edmund Bartlett told a press conference at his New Kingston office Wednesday that global events such as the 1,280 earthquakes which have rocked Puerto Rico since December 28, record-breaking fires which ripped though the Amazon RainForest – an ecosystem on which the whole world is dependent, last August and the bush fires which up to January 14 had scorched an estimated 18.6 million hectares of land, destroying over 5,900 buildings and killing 29 persons as well as an estimated one billion animals in Australia were redefining the global tourism reality.

“This conference is going to look very seriously at models and best practices from different countries on how structures, systems, ideas have come together to build capacity in different places and to help us in the Caribbean in terms of dealing with these seismic dramatic events which are now part of our reality. We have to get a better understanding overall of how the future of tourism is going to be configured,” Bartlett disclosed.

He said the greater frequency and intensity of hurricanes which are disrupting lives and economic well-being across the world required a response that was sustainable, as well as an investment in capacity building to be able to respond, track, manage, recover and build back better than before.

“Jamaica has been selected as the venue for the first-ever global summit on innovations and resilience management and this is very important for us as a destination because the discussions on resilience have become the new reality within the global tourism space because it is resilience that is going to be giving capacity to respond to these global disruptions that are coming daily at us,” the minister pointed out.

The country has much at stake to defend with preliminary figures for tourism earnings for 2019 climbing to an estimated US$3.7 billion, up from US$3.3 billion in 2018. This was built around the five networks of gastronomy, health and wellness, entertainment, sports and shopping which had seen the retention value of the dollar move from 30 cents in the dollar in 2016 to 40.8 cents in the dollar retained in the economy, according to the most recent figures from the World Travel and Tourism Council.

However, the country’s tourism is also driven by what Bartlett described as “tourism diplomacy”.

“We have inserted ourselves in the global discourses, we established institutions that are of global value and enjoy global embrace. So when meetings and academic discourses are contemplated anywhere in the world, Jamaica is considered,” he explained.

The other key component of our primary in the global tourism landscape is innovation, the understanding of how to add value to your processes, and so (business) start-ups from Jamaica and the wider Caribbean are going to be also highlighted at the conference, according to Bartlett.