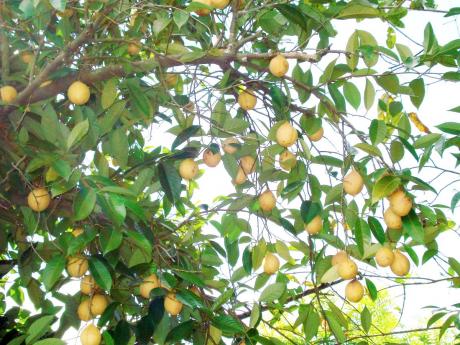 Known as the Spice Island of the Caribbean, Grenada was second only to Indonesia in global nutmeg production before hurricane Ivan, in 2004, crippled the industry by destroying 90 per cent of the crop. Damage to tree crops, food crops, livestock, fisheries and agricultural infrastructure amounted to almost US$45 million, and over 90 per cent of the island’s forest areas were destroyed.

Now, the Ministry of Agriculture and Lands, in collaboration with the Grenada Co-operative Nutmeg Association and the Caribbean Agricultural Research and Development Institute (CARDI), is working on a grafting project as an alternative propagation method to increase nutmeg productivity.

Nutmeg trees are generally dioecious plants (either male or female reproductive parts) and after propagation by seeds, approximately 50 per cent of the plantings are usually male. The sex of each plant can only be known at the time of flowering, which is usually when they are five to seven years old.

By then, much money would have been invested in terms of fertiliser and other inputs, but once the plant is found to be a male, farmers in Grenada usually destroy it. Now CARDI is encouraging grafting as a practical option to convert the male plant into a productive tree.

On Tuesday, February 11, a team comprised of representatives from the Ministry of Agriculture and the nutmeg co-operative, journeyed to the farm of Ambrose Phillip’s at Belvedere, St John, and demonstrated the grafting technique to convert the trees. That farm was selected because it had experienced the unfortunate occurrence of more than 80 per cent of the plantings being male.

According to agricultural instructor at the Mirabeau Propagation Station, Sherwyn Joseph, the results of a successful grafting should be evident just over a month later.

“Once we have selected the female plant with the desirable characteristics – large seed, thick mace – we take the budding material from those plants and graft it on to the male plants. After the budding process, it will take about four to six weeks, and the farmer will have to observe the graft and remove the tape once he realises that the bud is active. He/she will notice that the bud that grows out will be a female bud,” Joseph explained.

This grafting technique was developed and tested as part of the European Union-funded Spice Research Project. CARDI representative Reginald Andall said it was one of the measures agreed upon when the co-operative asked for assistance in restoring the nutmeg industry to its former vibrancy.