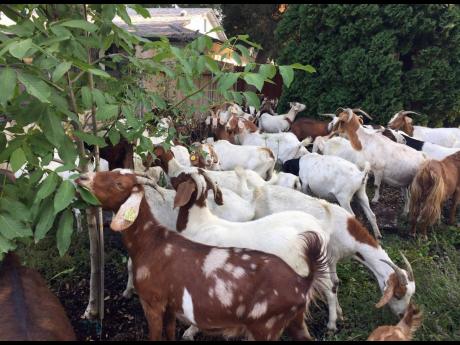 Police from the Fellowship Hall Police Post in Hill Run, St Catherine, last week returned 24 high-breed goats and a sheep to three grateful farmers in the area whose animals had been reported stolen recently.

The police have theorised that the stringent curfew that ran through the Easter weekend might have crimped the criminals’ plan last week Tuesday.

The Fellowship Hall Police Post is located in the Hill Run Agro Park, and a team led by Woman Sergeant Leline Golding was on mobile patrol in the farming community of Clifton at about 5 o’clock in the morning, when they spotted three men who began acting suspiciously before running off. The police gave chase and came upon a two well-stocked pens with goats and sheep.

When they approached the front of the property, the men opened a gate at the back and sent the animals scurrying. The patrol team, which was undermanned, called for assistance, and the special operations team out of St Catherine South, led by Corporal Leighton Hutchinson, responded and helped them secure the animals.

Golding believes that the curfew implemented over the recent holiday weekend to stem the spread of the novel coronavirus might have hurt the thieves.

She theorised that the animals were stolen by criminals whose principals are stationed outside of St Catherine and who had anticipated selling the animals, which would find their way into pots at festivities over the holiday period, which ran from Good Friday to Easter Monday.

Easter Monday, especially, has traditionally been a day of celebratory activities at which curried goat and mannish water are usually a staple on the local menu.

“Because of the curfew orders implemented by the Government, which restricted pedestrian and vehicular movement over that period, they were stuck with the animals. Remember that they were stolen a couple of days before the holidays,” Golding said.