Alexander Hamilton: Passing of a legend 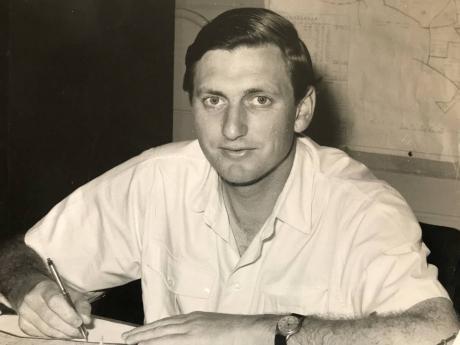 A 1953 photo of Alexander Hamilton.

The death of Alexander Vereker Hamilton on Sunday, April 12, marked the passing of a legend whose roots were firmly entrenched in Scotland but who came to have a lasting impact on the fortunes of the country he made his home, and which in turn showed its love and appreciation to this land baron, philanthropist, racehorse owner and breeder, farmer and gentleman.

‘Alec’, as he was fondly called, was born on November 1, 1932, at Strathleven House in Dumbartonshire, Scotland, and was married to Sarah Platt, also of Scotland, on November 5, 1960, with whom he had three children – Johnny, Laura, and William – all born in Jamaica.

Sadly, Alec lost his dear wife Sarah in 2001 to motoneuron, a disabling disease of the brain and spinal cord. All praised him for nursing her devotedly throughout her illness. In 2009, he married a family friend, Erica Downer, who was equally devoted to Alec and took care of him for 17 years and multiple skin cancer surgeries that greatly affected him. They were married for the last 11 years and yet, as Erica has said, he remained stoic and uncomplaining.

“He was a gentleman and a gentle man,” she told The Gleaner during a recent visit to the family home, pacing her enunciation to make sure we got the drift of her words about the man she credited with an unusual and unique combination of qualities. He had great strength but was gentle, had great intelligence but was quiet and not given to imposing his views on anyone. Alec’s only fault, as she could recall, was that he was completely stubborn, which could be very frustrating.

By the time he received the coveted None Such Award for lifetime achievement in 2010, Alexander Hamilton’s association with racing had spanned 60 years, and his last attendance at Caymanas Park in February to present the Alexander Hamilton Trophy to trainer Ian Parsard whose horse Superluminal won the one-mile event was a very happy one. It was a happy family occasion with his daughter Laura, son John and granddaughter Neya Hamilton in attendance.

This was a long way from 1954 when the 21-year-old well-to-do, handsome bachelor arrived in Jamaica to take control of the Caymanas Estate. By then, the estate had been in the family for quite some time, with vast holdings in sugar, but which had been operated on an absentee-owner basis. Alec’s mother Constance Crum-Ewing, who inherited Caymanas Estates when her father died, offered him the opportunity of living in Jamaica and running it, as she did not believe in absentee ownership.

It is reported in that year that Sir Alexander Bustamante said of the Caymanas Sugar Estate that it was “one of the most significant financial contributors to the Jamaican economy on whose annual business results are indicated Jamaica’s economic rising or falling”.

Just prior to Jamaica’s Independence, Alec was appointed a justice of the peace, and at Independence was granted Jamaican citizenship. Over the years, he gave land parcels as gifts to build homes for estate workers, a cricket pitch, and a community hall, land to create a home for the Young Men’s Christian Association, and land to enable the town to widen its highway. He was much valued by many for gifting land to dozens of local residents so they could build their own house and be landowners. In addition, he provided land to build a local cemetery and also an old people’s home at White Marl. The polo field, still much used by the Jamaica Polo Club with continuing popularity and international tournaments, was leased at a peppercorn rent by the Hamiltons.

Hamilton Gardens in Portmore, St Catherine, is named after Alec and is an adjoining community to Caymanas Park, for which he sold the land to Government for a nominal amount, but the story of how it came to be is interesting.

It was in the 1970s and Michael Manley was holding a political rally in the area, when Alec, who also happened to be in the area, stopped to see what was happening. Erica says he was shocked at the announcement by the politician who made the most of his presence.

“To his astonishment, in the middle of the political rally, Michael Manley says ‘I want you to know that Mr Alexander Hamilton is here with us today, and guess what? You will not believe it, he has given us land to build new houses’,” to which there was a thunderous shout of approval.

“Of course, Alec hadn’t given the land and in fact knew nothing about it,” she told The Gleaner, but after that he had to give it and it was called Hamilton Gardens after him.

His passion for and devotion to breeding and training of racehorses is believed to be inherited, with his grandfather winning at Royal Ascot in the 1930s with a horse called ‘Caymanas’, bearing the aqua and black colours which are still used today. His mother was a breeder and his sister Helen was a noted national hunt breeder and trainer in the United Kingdom. She won the Welsh Grand National in 1986 with a horse called ‘Peaty Sandy’.

It is no surprise then that when he died, Alec still had few brood mares and had a horse in racing, every year over the past 50 years, with the 1969 ‘Horse of the Year’ Persian Coin, the 1970 St Leger winner Charlotte Russe, and Mountain Music among the standouts. He also saddled perennial loser Long Shot, a horse that was such a crowd favourite that when he died on the track in 1969, he was immortalised in a song, Long Shot Kick De Bucket, by the Jamaican trio the Pioneers.

Over the years, it is estimated that more than 24,000 of the original 26,000 acres which constituted the Caymanas Estate has been sold off and given away, with the remaining acreage divided among various ventures, as Erica explained.

“We do livery, horses at pasture, we lease some land for various purposes and we’ve just done a small subdivision of land for commercial lots and they sold off before the plans were even complete. There is about 650 acres of the flat land and another acreage up here on the hill. I’m not certain how much that is … .”

When asked about life without her beloved Alec, Erica got emotional and admitted to having good and bad days. “There is a gap, what can I tell you? I feel lost because he is not there, but I am also chairman of the Caymanas Estates Limited, which keeps me busy to some extent, and that’s probably good.”

So it is that 66 years after settling in Jamaica, this son of Scotland, Alexander Vereker Hamilton, JP, CD, whose contributions to the development of the country which adopted him, and which he loved in return, will last for a very long time.