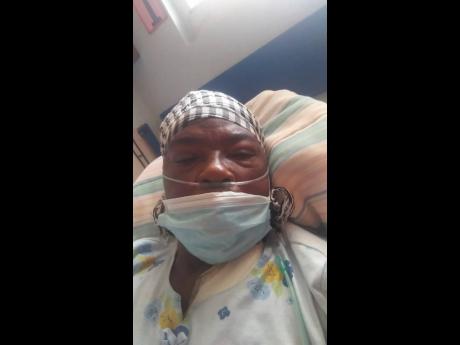 Contributed
Venda Anderson during one of her many admissions to hospital.

WHEN PAIN riddles your body and a reality of lack stares you in the face, it is easy for hope to be lost and faith to wane, but 59-year-old Venda Anderson says that is all she has left as she contends with impaired vision, stage five kidney failure, hypertension, and diabetes.

Anderson spent almost two decades of her life working for the janitorial department of a hospital, but she never thought that she would spend the remaining years of her life visiting the hospital in another capacity.

Every week ,the mother of three, who has pleaded to receive treatment twice instead of the three times per week as was prescribed, goes on the dialysis machine and hopes to live to fight another day.

She said as the weeks go by, it becomes harder to find the funds for treatment, and she fears she may soon have to stop the treatment entirely as her funds have all dried up.

“At this moment, it is only one of my sons who is able to help, and he is facing it hard right now as well. I have spent over a million dollars for treatment, and I have begged my way through. Some days I cry. I just cry because things are really hard. I don’t even have an account anymore because all the money has been used, so it has been dormant.”

An ailing Anderson said that while she can get some of the medication for her diabetes and hypertension free, she has to pay for dialysis before she can even go on the machine each week.

If that isn’t hard enough, she said she is now suffering vision loss as a result of a ruptured aneurysm she suffered six years ago.

“It was in 2014, New Year’s Day. I was outside, and I started feeling funny. Some persons around me said it may be my pressure (high blood pressure), and I told them it didn’t feel like it. By the time I went into the house to lay down, I felt like a truck got out of control and hit me in my head,” she said.

Anderson said she was taken to the hospital in Mandeville, where she found out she had had a ruptured aneurysm, then was rushed from there to Kingston.

“I started vomiting blood from home to Mandeville and from Mandeville to Kingston. My son had a little car, and he had to sell it for me to do the surgery for $250,000.”

She said when she recovered, she sought janitorial work at a nearby school, and it was there she experienced vision loss in her left eye.

“I was in the sun, and I just felt a sharp pain in my eye, and the left one went dim. This pressure won’t leave me alone. I went to Kingston and all over and I was to find $125,000, but I couldn’t find it. When the ship with doctors came to Jamaica, I went there, and they referred me to a hospital, but because of COVID, they say they are not doing any surgeries now. I have been here with it, and it seems now that the other eye is being affected,” she noted.

Anderson said that now, she needs help getting around as her strength and vision are simply not what they used to be.

“I stagger when I walk, and even when I push and try to do it on my own, it doesn’t work. I went to Spaulding on Friday, and I fell down right on my face. It is rough, believe me to God. Sometimes when the pain hold me, I just have to pray it off and tell myself I am not feeling the pain. Even with COVID, I am so worried sometimes, but I really just have to pray.”