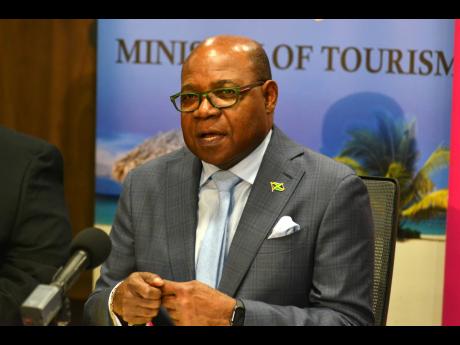 In light of misgivings being expressed nationally about the widescale opening of Jamaica to overseas visitors, Tourism Minister Edmund Bartlett has asserted that the industry’s corridors will be split to accommodate the island’s reopening.

The corridor will run from Negril in the north-west to Port Antonio in the north east, allowing Ministry of Health and Wellness personnel easy access to tourism entities operating on the coast.

“We have established a COVID-resilient corridor, which will embrace all the activities within that area, just along the main road straight through the coast,” he told journalists during a digital media briefing last Thursday from his New Kingston offices.

Bartlett said that reopening of the sector, which commences on Monday, June 15, will take place in two phases, with the south coast opening up at a date to be announced.

“Zoning and containing the movement of visitors to the north was made after careful consideration of the potential risks to the local population and the presence of better infrastructure there and easier traceability and manageability,” he said.

He argued that the prevalence of all-inclusive hotels on the north, which have all the amenities needed by tourists within their properties, would help in curtailing unnecessary movement. This, he explained, was a crucial factor in the ministry’s decision.

“So it’s a manageable corridor which is able to have easy access, for it is important that we will be able to trace the visitor and to contain their movement within those areas. I think Jamaica is most fortunate that one of our models is the all-inclusive model, and so much of what the visitor needs for their own entertainment, and so on, are within those areas,” he said.

This new dispensation will see the country being marketed in this fashion, outlining a clear demarcation in the marketing literature so that visitors are abreast of the protocols, “in relation to how they will function and move within this first phase of the opening when they come to Jamaica,” he added.

With respect to the second phase, Bartlett said Kingston was a special case, and even though it does not fall in the north, is considered as ‘business travel’ and would be subsumed in the first phase.

As for the delay in reopening the south coast, which spans Whitehouse in Westmoreland to Kingston, Bartlett said, the north coast was given the edge over this zone as it currently has better transportation arrangement and ease of access to communication.

“The prime minster made a very clear position on business travel and how that would function, and so the Kingston area would be that corridor which would be business travel,” he said.

He informed that Hospiten Hospital in Montego Bay, which caters not only to the local market, but gets the majority of its business from the sector, has dedicated an entire wing for COVID-19-related cases that may come to them.