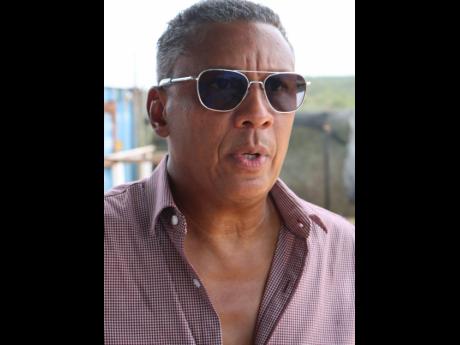 Photo by Christopher Serju
Gary Coulton, who cultivates a mix of crops at the Sping Plain agro-park in Clarendon, was able to ease his crop volumes through a recent agreement facilitated by the Government for GK Foods to take 10,000 pounds of West Indian Red pepper.

The recent delivery of 10,000 pounds of West Indian Red peppers from the farm of Gary Coulton at the Spring Plain Agro-Park in Clarendon was met against the backdrop of a major COVID-19 setback.

As the farm was ramping up activities to meet this major delivery, the lockdown of St Catherine meant that the farm manager could not leave the parish, forcing a hold on several operations. Workers were also affected by coronavirus containment measures.

“It set us back two months, but we are not going to let that bother us. We are not complaining. We are trying to find a way to co-exist with COVID,” Coulton told The Gleaner during a recent tour of the property to coincide with the delivery to the Hounslow, St Elizabeth, agro-processing facility of GK Foods.

He described the intervention by GraceKennedy as a big help.

“Not many people can buy 10,000 pounds of anything in Jamaica. If everything works well, you will hear everybody say glut, but that is because we really don’t have any take-off for large quantities. So for pepper, they work well with me, and it keeps the cash flow because people have to get paid,” said Coulton.

Meanwhile, general manager of GK Foods & Services – Grace Agro Processors, Maureen Denton, explained that under the contractual arrangements facilitated by the agriculture ministry, the company has taken off 22,000 pounds of peppers from farmers since April.

“These are not our contract farmers. They are just farmers out there who have peppers,and we are providing a market for them,” she told The Gleaner.

The farm, which operates on 200 acres of the agro-park, cultivates a range of crops, including Scotch bonnet pepper, West Indian Red pepper, pumpkin, sweet potato, and is putting in some lettuce and cabbage for sale to fast-food chains that used to import these items.

Coulton shared that with his farm having Global Gap certification, he is well-equipped to meet the needs of international chains.

With a standard workforce of about 11 regular workers, this number jumps during harvest time, with an additional 15 workers needed for periods such as the weeklong reaping of the recent pepper crop.

Coulton said that he is looking to up his game by venturing into value-added products.

“Anything we grow, try to find a way to lengthen the shelf life – either we canning it or vacuum sealing it,” he said.

Coulton, who has been involved in agriculture for the past two decades and cultivated Scotch bonnet peppers on a commercial scale in Florida for 15 years, came back home in 2008.

Expansions plans were delayed for some time since only half of the farm had water. However, that setback was recently resolved, and he is looking to ramp up production.