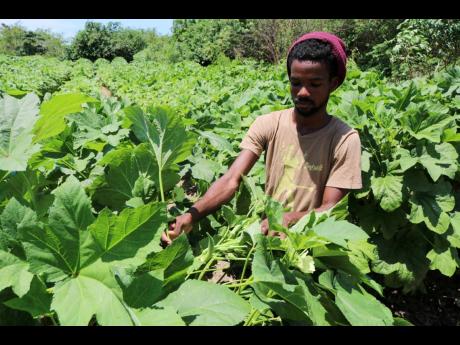 Photo by Christopher Serju
Farmer Mario Bailey peels back the foliage from an okra plant on the farm of Byron Thompson to show that it is just about to bear.

SMALL BUSINESS Asso-ciation of Jamaica (SBAJ) President Hugh Johnson has vowed step up its advocacy in support of farmers he claims are being evicted from a section of the former Bernard Lodge sugar estate of which Cabinet has approved a sale of 100 acres and lease of another 300 acres to businessman Gassan Azan for agricultural purposes.

Johnson is contending that the Sugar Company of Jamaica (SCJ) Holdings Limited, which is divesting the property, has failed to live up to the conditions under the agreement for the relocation of the farmers. These include, among other things, full compensation for all crops and infrastructure, time to harvest crops in the field and the provision of suitable land with similar infrastructure – before their relocate.

Johnson told The Gleaner that while some farmers have been evicted from the land, a small cadre who have crops bearing and from which they are still fulfilling contractual obligations are being intimated and threatened with dislocation.

He is backing these farmers in their efforts to get a full compensation and proper relocation package before they are driven off the land.

“There is a general tendency to displace farmers from state-owned properties across the island with impunity and we are calling upon the Government to put an immediate halt to that and to treat farmers with the respect they deserve, especially in this critical time of food insecurity,” Johnson told The Gleaner.

He accused the SCJ of taking a ‘Backra Massa’ approach to the issue, with the farmers being given little or no say in how the matter is being handled.

Azan plans to construct a state-of-the-art agriculture mother farm for cultivating a combination of tomato, pepper, turmeric, ginger, honey, strawberry, coffee, yam and other crops on the leased property.

Responding to queries about the blocking of access roads to some of these farms from the Lakes Pen main road by agents of Azan, SCJ Chairman Joseph Shoucair said he was satisfied that his organisation had met all the conditions and accused the farmers holding of being “troublemakers”.

“I know that a private landowner, who has bought land, has blocked off his land. I’m aware of that, he is the owner of the land,” Shoucair declared, but when asked if all the established conditions for relocation had been met, he was unable to provide specifics, only saying, “If water is not in place, steps are in progress to have water in place.”

Former member of parliament for Central Kingston and past state minister for agriculture, Victor Cummings, who is supervising the transition of behalf of Azan, told The Gleaner: “All I know is that Mr Azan purchased the land and I have a copy of the lease agreement that they (farmers) signed with SCJ, where they were supposed to have removed off the land.”

Declaring that on location as he spoke with our news team last Thursday, Cummings insisted that he was on the property occupied by Byron Thompson, who has insisted that he is in the process of fulfilling a contract for pumpkin and okra three times a week.

“He’s reaped the crop already. I’m looking at it right now and the okra has been reaped. So, please, don’t fall for the misinformation,” he said.

However, when The Gleaner visited the property the following day, there was a plot of okras just coming into bearing at the front of Thompson’s farm.

Meanwhile, Johnson, who has a farm at another section of the Bernard Lodge property and has been given notice to quit, pointed out that in February, Shoucair showed him a site in Hill Run, to which he could be relocated and he accepted.

“He said to me that within a week, it will be finalised, and I get one peep out of Shoucair. Is the same thing happen with Mr Thompson. He signed something to agree that by February (2020), he would be leaving, but they gave him nowhere to move to and not until they adequately offer an acceptable site to relocate, he will not remove from where he is. I am still farming where I am and they haven’t troubled me, yet but I can’t wait until they block off my access road,” he said.