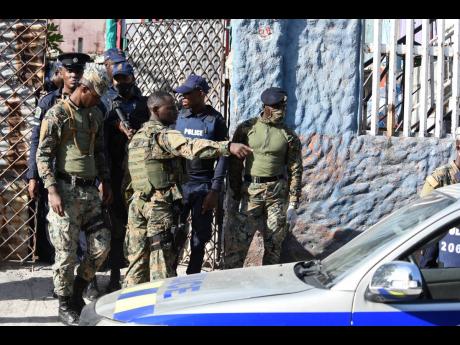 Kenyon Hemans
Members of the Jamaica Defence Force and the Jamaica Constabulary Force search a building along Fourth Street in Greenwich Town, Kingston, on Thursday. The community has been declared a zone of special operations from July 1 to July 14, 2020.

A woman identified as Adaica ‘Poochie’ Lawrence of Fourth Street, Greenwich Town, in south-west St Andrew was taken into custody by the police on Thursday following a protracted search of the premises, a day after Prime Minister Andrew Holness announced a zone of special operations for the community.

Lawrence was eventually bailed and is booked to attend the Corporate Area Parish Court on Monday, August 3, to answer to a charge of using indecent language to members of the security forces who carried out the search.

She was transported to the Hunts Bay Police Station even though residents of the area pleaded with the commanding officer to exercise leniency on the grounds that “her head nuh good”, intimating that she had psychological issues.

However, he refused, insisting that “she must know how fi talk to people”.

When this reporter identified himself as a member of the Gleaner news team and asked to speak to the officer, he bluntly refused to entertain our request, declaring: “No, I am not giving you any information.”

PLACED IN THE BACK

Earlier, Poochie had been placed inside the pickup van by the officers escorting her. However, upon realising this, the commanding officer sternly directed that she be taken out and placed instead in the back of the vehicle.

Handcuffed with her hands behind her, the detainee was unable to help herself until the cuffs were opened and she was able to scramble up, with some difficulty, into the vehicle, unassisted, after which she was handcuffed to a section of the pickup in a seated position.

Other residents had waited for more than 45 minutes, their curiosity piqued when a member of the Caribbean Search Team came out for a bolt cutter, adding to the crowbars others had in their possession. However, no locks or bolts were cut or doors prised open.

In fact, the people whose homes were searched in their presence commended the members of the joint military-police team, comprising mostly men, for what they termed exemplary treatment.

“Them deal with wi good,” was the general consensus.

A number of women explained that after conducting searches, the officers exercised care in placing objects exactly how they had been found.

A water gun was the only thing that The Gleaner could ascertain was found in the search, which involved members of at least five branches within the Jamaica Constabulary Force, along with members of the Jamaica Defence Force.