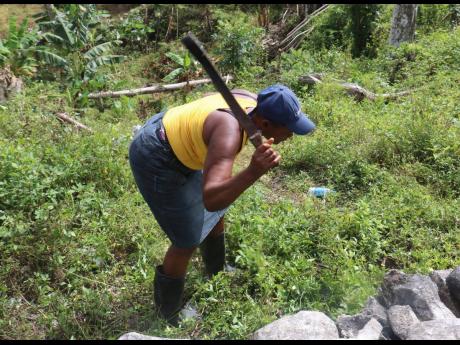 Melrose Richards of Berkshire Wood clears her land in preparation for the planting of sorrel.

They are breadwinners for their families, equal contributors to their spouses, and food basket providers for Jamaicans.

The female farmers who operate the length and breadth of the land in Berkshire Wood, Pigeon ‘Piggin’ Gully, Ginger Grove and Pisgah, in the Breadbasket Parish of St Elizabeth, are anxious to have their produce fed to people all over the world.

Some 28 women farmers, led by Pisgah Primary School principal Patricia Forrester, are prepared to toil the land, providing food security for not only Jamaica, but any market that opens its doors to them. They are already inspired; all they need is the right equipment to expand a business that has tremendous potential.

They farm string beans, cucumber, cabbage, yam, sweet potato, pumpkin, sorrel, pineapple, sweet and Scotch bonnet pepper, pak choi, okra, plantains and banana on large acreages of land in their community, and were not under a COVID-19 financial loss lockdown.

“All the students from Berkshire Wood attend our school, most of the female farmers, most are the breadwinners in their households, but they are not able to take farming to the level that they really want to take it,” Forrester shared with The Sunday Gleaner.

She wants to see the expansion of their farms, so that they can be the independent women that they really want to be, she stated, adding that she knew they want to be able to send their children to the best high schools and best colleges, and that was what prompted her intervention.

“I took the decision to see how much I can help them,” Forrester noted.

According to the principal, the women need support with fertiliser, which is very expensive. “And paying men to help them toil the land is also expensive,” she argued, explaining how she witnessed one of the youngest female farmers in the area, and a past student of Pisgah, Vivacia Wright, clearing the land with a machete, “but she would be better off with a weed whacker with the blade that looks like a machete to assist, or any type of technology that can help her to modernise the process”.

Wright, who is 30 years old and a past student of the primary school, is respected in the community as a wholesaler. She sells to the market vendors in her community who ply their wares at New Market in the parish on Mondays, or Coronation Market in Kingston on Saturdays.

But getting to her farm, which is 1.5 miles from her home, takes about an hour by foot, and when she reaps her produce she carries up to 100 lb on her head to the roadside for market vendors.

“The walk from the farm to the roadside where cars do the picking up takes about 15 minutes, but I prefer to walk with 100 lb than do several trips,” she told The Sunday Gleaner.

The farmer, who learnt the skill from her father and brothers, is not complaining and prefers life in her rural district to the lights of the nearest city any day, hence her reason for not moving out of her district after high school.

In fact, Wright, and other farmers such as Melrose Richards and Barbara Nelson, will tell you that on many occasions they have had to bush and dig the land themselves in the absence of help from their male counterparts, but giving up on their independence is not an option.

“I try to have my little dollars for myself, all when my husband gives me money,” Rose Daley, who was digging the ground to make way for sorrel plants, stated.

With machete in hand, water boots and a bag slung across her body, Daley described the women in her area as strong black sisters who believe in progress.

Daley has been a farmer for 30 years, and some of her children will continue the family tradition.

“Our food is the best, so we should be providing food security for other countries in the world,” she declared.

On the other side of the mountain sandwiching Pisgah, Sonia Griffiths, one of five pineapple farmers in Ginger Grove, displays two different types of pineapple – ‘Cow Boy’ and ‘Bullhead’.

She is able to boast that the area is known as the pineapple Mecca in Jamaica, while explaining that ‘Bullhead’ suckers were made in the lab, and yield more.

“Most people are going for Bullhead,” she stated, noting that the average size of the fruit weighs four lb, while the Cowboy hardly goes over two lb.

And Griffiths is excited about the prospects, with Forrester giving them a sense of hope.