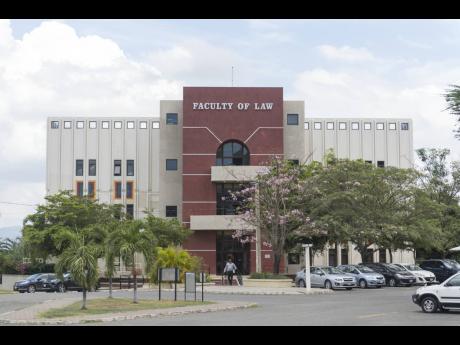 File
The Faculty of Law building at The University of the West Indies, Mona.

Senior lecturer in the Faculty of Medical Sciences at The University of the West Indies (UWI), Mona, Dr Christopher Ogunsalu, says questionable promotion and hiring practices and Jamaica’s failure to stabilise the dollar has caused Mona to be on weaker financial ground than its sister campuses in Trinidad and Barbados.

Mona Principal Dale Webber had previously disclosed that the COVID-19 pandemic has worsened the financial strain the campus had been under, indicating that the administration had reached out to the Government for support.

“There is no doubt that the COVID-19 pandemic will deal a significant blow to our finances here at Mona. You will remember I have been going to faculty by faculty saying how bad some of the financial situations are. They’re even worse now,” Webber told deans, lecturers and students in a virtual town hall in April.

He pointed the finger at lower levels of collection from students, the suspension of some fees, extension of payment plans, a downturn in the commercial activity at the campus due to the suspension of on-site classes, and the impaired ability of students to register for the upcoming academic year.

However, COVID-19 aside, Ogunsalu told The Sunday Gleaner last week that while he fully supports the university, it needs to shed some baggage in order to improve its financial standing.

“This baggage includes making appointments and promotions based on favouritism and certain kind of personal orientation and association with lodges,” he said. “This has killed the university system, and this is much more pronounced at the Mona campus than at the [Cave Hill] campus and St Augustine campus. Appointments and promotions must be made based on merit, academic performance, and how much you can promise to bring to the university in terms of money.”

He also took issue with the “degrading and disgraceful culture” of retaining retired staff on the Mona campus.

“The continued renewal annually of contracts of academics and administrators who have retired is sucking the system financially and suppressing development in all directions,” Ogunsalu said. “Once a staff member becomes retired, that is exactly what it should mean. In fact, UWI brings them back in before they even collect their retirement benefits.

“The University of the West Indies and the Government of Jamaica have failed over the years to appreciate that the financial deficits currently being experienced have progressively developed along with the [depreciation of the Jamaican dollar],” said Ogunsalu, who also hinted that the Mona campus was having cash-flow problems.

“The Trinidad campus and the Barbados campus that have some self-financing courses quoted de novo in US dollars are not currently put under any scrutiny or protest by the government or by the people of those two jurisdictions, simply because the Trinidad and Barbados currency have remained stable over the years at TT$6 to US$1 and BDS$2 to US$1, respectively,” added Ogunsalu.

The UWI, Mona, announced a freeze in tuition fees for the upcoming academic year, but some students in the faculties of Medical Sciences, Law, and Engineering will have to dig deeper into their pockets to finance their studies due to their tuition being quoted in US dollars. The UWI has set the exchange rate for the 2020-2021 academic year at J$141 to US$1, triggering howls of protests from many students.

“The University of the West Indies should not be cajoled into accepting the USD equivalent in JMD at a rate that they obtained last year when the exchange rate was J$130 to US$1 at this upcoming academic year, where the exchange rate will be approaching J$150 to US$1,” said Ogunsalu. “Succumbing to all these pressures will do nothing other than lower the standard of education, having been recognised for years as the citadel of academic excellence.”

Ogunsalu pointed out that students in the self-financing programmes collectively finance the delivery of the courses – including payment for lecturers, cleaners, examiners (local and overseas), administrators (external and internal), equipment, and development of research – without any assistance from the Government.

He said that of students who paid all fees ahead of time or at the beginning of their studies, they would not be “caught up in this seemingly false increase in the fees”.

Said Ogunsalu: “The UWI is not the Bank of Jamaica and they cannot regulate the level of the currency. Every time the exchange rate changes, the Jamaican equivalence for the self-financing courses changes, but the US-dollar quotation of the fees, from what I know, continues to be the same.”

He said that the Faculty of Law at the Mona campus was the first to introduce a self-financing fee structure, followed by the dentistry programme, which he developed after spending eight years at the St Augustine campus in Trinidad. Next up was the Faculty of Engineering. These fees, he said, have remained where they started out in US dollars.

Students in the nursing programme have also bee paying fees quoted in US dollars, going back to more than a decade.

At the start of each year, The UWI, Mona, establishes an exchange rate which is maintained for the duration of the years, regardless of fluctuations in the value of the Jamaican dollar.

“While a student can opt to pay in US dollars, it becomes inequitable to now allow another student to pay at a sentimental exchange rate in Jamaican dollars rather than in the currently existing exchange rate,” said Ogunsalu. “The same self-financing programmes that exist at the Mona campus also exist at the Barbados campus and Trinidad campus ... . So the students can opt to go to those campuses, where these programmes are not self-financing. However, there is an admission problem. They will not get in as easily as they will at the Mona campus.”