COVID-19 nonchalance, frolic and much confidence out west 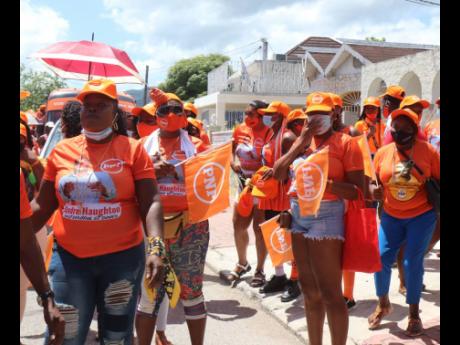 The assurances given by the leadership of the ruling Jamaica Labour Party (JLP) and the opposition People’s National Party (PNP) that they would ensure that the COVID-19 health and safety protocols would be followed on nomination day turned out to be a complete farce in western Jamaica, where they were flaunted with impunity.

The exercise which unfolded on Tuesday, saw supporters of the two parties swarming the streets in large numbers, singing, dancing, gyrating, and hugging as if the deadly virus was the hoax United States President Donald Trump had claimed it to be.

“When this nomination finish, COVID going beat us like a drum,” an elderly woman said as she watched JLP supporters dance and gallivant up and down the crowded St Claver’s Avenue in Montego Bay, where St James Central contenders – the JLP’s Heroy Clarke, the PNP’s Andre Hylton, and the Jamaica Alliance Movement’s Ras Astor Black were nominated.

“Yes, I am concern about COVID, but I have on my mask and I have my spray bottle with alcohol. It is impossible for us to be three or six feet apart in this crowd,” said Antoinette Facey, a PNP supporter in St James South. ”We were not going to look less than the JLP, so I took the risk.”

The COVID disregard aside, the confidence oozing from the various candidates would suggest that the upcoming election will churn out some keen battles, especially in St James Central, St James West Central, Hanover Eastern, and Westmoreland Central.

In St James Central, which the PNP is said to be targeting, the JLP’s incumbent, Heroy Clarke, is quite confident that, like in 2016 when he defeated the PNP’s Ashley Foster, he will beat back the challenge of Andre Hylton, who will be the PNP’s standard-bearer.

“Don’t you see the energy ... I am ready, and the people are ready,” said Clarke, who turned up seemingly ready for battle, clad in full military-style fatigue and a green Clarks shoes. “Nothing can stop this movement … we are winners already.”

While it appears a foregone conclusion that the JLP, which now enjoys a 4-1 advantage in St James, will easily retain St James Eastern, through Edmund Bartlett, and St James North West, through Dr Horace Chang; in St James South, their quest to wrestle the constituency, which was won for six consecutive terms by the retiring Derrick Kellier, is set to be stoutly defended by Kellier’s replacement, Dr Walton Small.

“It will be three strikes out for Homer Davis,” said Small, in reference to his JLP challenger, who lost twice to Kellier. “I will be sending him into retirement … I would be very disappointed if I do not win by more than 1,000 votes,” said Small.

In Trelawny South, Marrisa Dalrymple-Philibert is expected to continue her stranglehold, but in Trelawny North, the JLP’s Tova Hamilton is been projected to end the PNP’s reign of incumbent Victor Wright, who won the seat in 2016.

“I have a strong feeling Tova is going to do it,” said Angella Brown, a Falmouth-based JLP supporter. “Falmouth has always been the PNP’s stronghold and she is enjoying great support in Falmouth.”

Based on the support both parties pulled out for nomination day, it would appear that two Hanover seats could be in play on election day. In the east, former West Indies cricketer Wavell Hinds seems ready to give incumbent member of parliament, the JLP’s Dave Brown, a good run on the PNP’s ticket.

“Through the work of the late great Michael Manley and his social work, I personally benefited and so did my family, and as a result, if I do not owe it to anybody else in my lifetime, I owe it to Michael Manley,” said Hinds, in explaining his zeal to serve.