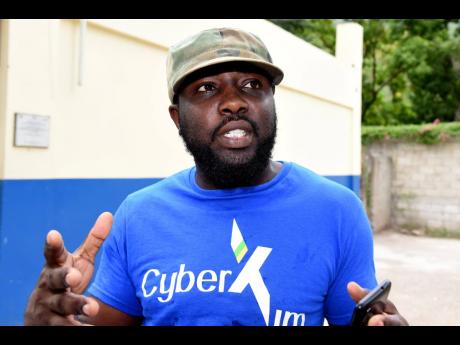 Kenyon Hemans/Photographer
The University of the West Indies student Ricardo Williams relates first-hand experience on how hard it is for him to attend school because of the constant gang violence in the community.

Born and bred in August Town, Ricardo Williams, founder of the Kingdom Builders Outreach programme, strongly believes that the way to turn things around in his community is to train young minds to think.

The final-year social work student of The University of the West Indies started the educational programme at the end of May to help get the students ready for the start of the next school year amid COVID-19.

“We know that when you are out of school for a while, it kinda takes time to readjust. That’s what happened with me. Me did haffi go back from scratch – nouns, pronouns – honestly,” said the 33-year-old.

Like many parents in August Town, Williams’ mother made sure he was enrolled in a school outside of the community. Yet, because of the countless flare-ups of violence in the area, many times he was unable to attend.

The Excelsior High School past student graduated to the street corners of August Town as he felt that “being on the corner was the in thing – to smoke, drink, and have gun. It nearly cost me my life,” he said.

Williams recounted one time when he had to leave August Town because of an outbreak of violence. It was upon his return that his life took a turn.

In a community known for gun violence, he started doing volunteer work, with the desire to change the narrative of the young people and the community. He worked with various organisations to recruit people to enrol in different programmes. Among those was the Mona Social Services, from which he acquired a scholarship to complete his undergraduate degree at 28 years of age.

“Is when I reach university I realise the importance of education. It’s not about learning the facts, it’s learning to think. Many young persons are following others, they are not thinking for themselves.”

Even as an adult, Williams described being at home as a very fearful and traumatic experience. He expressed that “it is kind of challenging, to be honest, going to school and living in a community like this. Some of the times when I’m studying, I hear gunshots and it somewhat throws me off. I can’t fully concentrate because once the shots begin to fire, I kinda get a bit scared.

“If we can change the way the youth think, then the community will be impacted to change,” he said.

Kingdom Builders Outreach is aimed at getting the students of the community ready for the new school term. The programme hosts children from age two to 16 years with a focus on mathematics, English, information technology and Bible study, all at a cost of only $500. Williams also hosts a free football programme, which he uses as a tool for mentorship.

“When a don is forming a gang, he takes four or five young men with him, and each of them takes another four or five. If we can pull them into this programme, then at the end of the day, there will be no one there to join these gangs.”

Williams’ efforts are propelled by the need to expose the youth of August Town to a reality beyond fear and violence. “Whatever work I do here is to show the youth that change is possible, and if others do it, you can do it, too.”