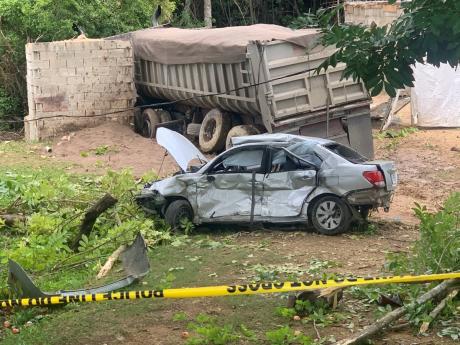 Photo by Adrian Frater
The trailer and the car that were involved in yesterday’s fatal crash along the North Coast Highway in Trelawny that claimed the life of 36-year-old cosmetologist Dian Johnson.

The accident-prone Trelawny leg of the North Coast Highway registered yet another death yesterday when a young woman lost her life as the car in which she was travelling collided with a trailer,with both vehicles careening off the roadway, ending up in a ditch some 60 to 70 yards away.

The dead woman has been identified as 36-year-old Dian ‘Michelle’ Johnson, a cosmetologist of Falmouth Gardens in the parish.

Johnson’s six-year-old son and a female friend, who were also travelling in the vehicle, and the driver of the trailer sustained injuries and were taken to hospital. The extent of their injuries could not be ascertained by The Gleaner.

“This is shocking! Mi can’t believe Michelle just dead so,” said a male friend of the deceased woman, who rushed to the location after hearing about the accident. “I really feel it for her family ... . She was so full of life. I really hope her son, her friend, and the trailer driver pull through.”

According to reports, shortly after 10 a.m., Johnson, her son, and her friend, who is said to be a visitor to the island, were travelling along the roadway when on reaching a short distance from the traffic light at the intersection of the Daniel Town main road and the North Coast Highway, the visitor, who was driving, attempted to make a U-turn.

Before she could complete the manoeuvre, the trailer, which was coming from the opposite direction, slammed into the side of the car, sending both vehicles through a patch of bushes and into a muck-filled ditch.

Persons witnessing the accident rushed to their assistance. Johnson was determined to be dead and the others were rushed to hospital.

When The Gleaner arrived at the location, traffic in both directions had come to a standstill as officers from the Trelawny Police Division processed the scene. Johnson’s body was still at the location, covered with a piece of white material.

“It is too early to say what really transpired here as we are still collecting information from persons who witnessed the accident,” a police officer at the location told The Gleaner. “However, the fact that one side of the car is extensively damaged would suggest it was doing some kind of a manoeuvre at the time of impact.”

The section of the highway where the collision took place is one of the parish’s most feared hot spots, known for reckless driving and excessive speeding. The traffic lights were installed last year to bring some order to the roadway.