#JaVotes 2020 | Voting for the PM, not the MP – Robertson facing stiff challenge in St Thomas Western 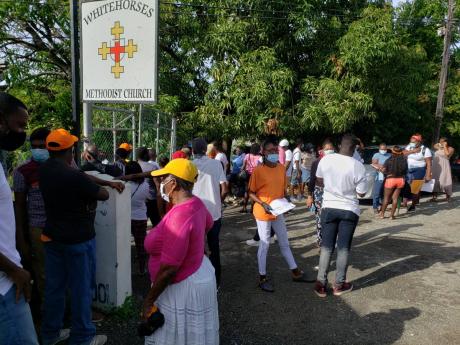 A crowd of people huddled together at the White Horses Methodist Church in St Thomas Western an hour after the polls opened illustrated that it has already been an active day of voting in the White Horses Division.

And though voters failed to practise social distancing on the outside, members of the security forces ensured that the proper guidelines were adhered to on entry.

The popular polling division, which boasts some six stations, is known for voting in favour of the People's National Party (PNP).

In fact, despite his strong hold on the St Thomas Western seat since 2002, the Jamaica Labour Party's (JLP) James Robertson has never won the White Horses division.

PNP cluster manager for the area Kirnette Rosedom is confident that Robertson will not make history this term, either.

"I think he's trying to get it this time, but we are experienced, and we have been doing our jobs, so we're going to make sure that the PNP brings home the division as usual. Tell James that this one won't be available," Rosedom said.

Rosedom told The Gleaner that in addition to winning the division, she strongly believes that her party's representative, Marsha Francis, will unseat the incumbent member of parliament.

According to her, "We are tired of not being represented well here in Western St Thomas, and I can feel it that this time, James will go home. We have done our homework, and we see where we'll get victory in the end."

In the meantime, over at the Yallahs polling division, Fredrick*, who revealed that he has been voting for nearly 20 years, remains on his mission to keep the JLP in power.

Despite his surprising but obvious displeasure with the party's representative, the man clad in green explained his reason for voting in favour of the JLP.

"It's simple. We a put back the present prime minister, Andrew Michael Holness. Mi cyah afford fi go back unda PNP. Dem a flip-flop, and mi cyah tek the uncertainty. When Andrew seh yes, a yes... . It may tek a little time to come through, but it a come through. A him mi a vote for," he said, adding that he had no comment on Robertson's leadership.