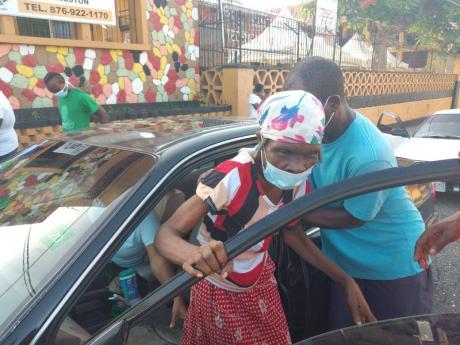 This elderly woman is being assisted into a car after casting her vote at the Kingston Technical High School in Central Kingston this morning.

At approximately 7:30 a.m., scores of voters had already converged on the Kingston Technical High School to cast their vote for the representative to replace Ronald Thwaites as member of parliament for Kingston Central.

When our news team arrived on location, we observed a well-organised queue in place, but as more persons arrived, the situation deteriorated as the location became more crowded. However, things quickly returned to normal with the help of the police and election day workers.

While most persons were wearing masks, some were seen wearing theirs improperly. There was also concern surrounding some election day runners who failed to properly sanitise or don masks while assisting the elderly and disabled.

Winston Thorpe, 74, who was assisted by his grandson to the polling station in his wheelchair, told The Gleaner that he wasn't excited to come out but said it was crucial to do so.

Meanwhile, Duncan Price arrived at the Kingston Technical High School at approximately 8:35 a.m. without much fanfare.