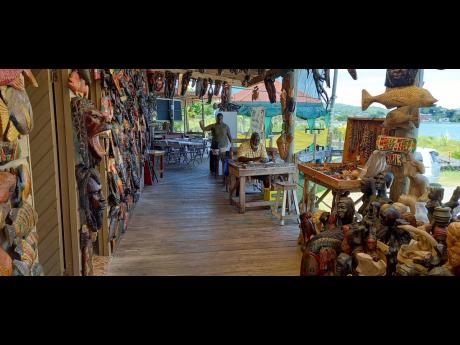 Contributed
Craft vendor Girvan Rhoofe plays a game of cards while hoping that a customer will visit his stall.

REELING FROM the effects of the coronavirus pandemic, which has crippled their livelihoods, craft vendors in Port Antonio are struggling to cope with the ongoing crisis and are now seeking new occupations.

The picturesque craft village at Allan Avenue in Port Antonio, Portland, is now virtually abandoned and closely resembles a ghost town with little or no activity. It has become a daily routine for some craft vendors to play cards or dominoes or enjoy a game of ludo just to pass the hours.

“A everyday ting dis, man. We just a hold a vibe and a watch the days passing by. There is nothing else left for us to do,” said Girvan ‘Rock Bottom’ Rhoofe, a craft vendor and woodcarver of more than 40 years.

“Those of us that can come out every day are kept idle, playing games or just sleeping with nothing else to do. There is no business taking place here, and some restaurants have simply closed down because they are not making any money, and rent has to be paid to the Portland Municipal Corporation. Bwoy, is a long time me nuh pay market fee. Nutting nah sell, and nobody naah come fi buy anything,” he lamented.

“We have family to feed and bills to be paid. If a never my likkle savings, dog nyam mi suppa. A it mi a pinch, and mi cyaan pinch too hard, or it a go done quick. Some vendors lock down dem stall and gone do construction work, some a do domestic work, and some just stay home. If you look down the aisle, you will see say most a di shop dem lock up,” Rhoofe added.

According to Rhoofe, when the tourism sector was closed shortly after the first case of the virus was confirmed, everything was brought to halt, and business has not recovered.

“Bearing in mind that things were very bad before, but now, it has gotten far worse. The last item that I sold was a bracelet for J$1,000, which was more than a week ago. I am not making any money, and not just me; we all share similar fate and experience. My light bill is at $14,000, up from $7,000, and I don’t even know how I’m going to pay it. My son will be returning to school shortly, and I have no money,” said Rhoofe.

During a walkthrough of the facility by The Gleaner on Tuesday, padlocks were visible on the majority of the shops at the craft village, and there were only a few vendors on the property. The two restaurants that remain open are operating on a cook-to-order basis.

Another craft vendor, Shelly Evans, pointed out that she had taken up a new occupation, assisting with the selling and marketing of fish for her brothers, who are fishermen.

“I have two children to support, one of which is in high school,”said Evans.

“I really love being a craft vendor as it allowed me to meet people of different cultures and nationality. However, it is so bad now that it cannot get any worse. It is really a difficult time for us as craft vendors. Some of us have to travel from far distances to get to the craft village, and we are not earning a dime. Most of the vendors are forced to stay home as it is a lot cheaper for them to do so. We need help, and we need it now.”