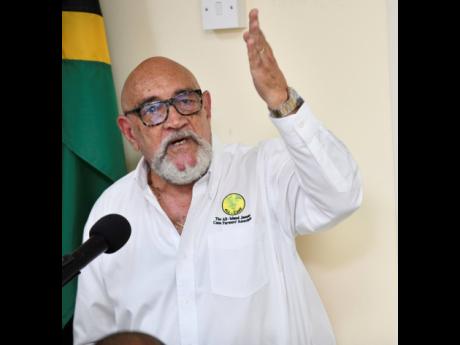 Noted cane farming stalwart Allan Rickards, who died late Tuesday night, has been hailed as an unflinching advocate for the rights of sugar workers and a proponent of innovation in the wider agricultural sector.

Karl James, sugar marketer and chairman of the Sugar Association of the Caribbean (SAC), described Rickards, 79, as one of the most strident lobbyists in recent history.

“He was one of the few cane farmer leaders who insisted on going to the meetings of the SAC and make his push for the inclusion of the cane farmers in whatever arrangements that were made,” said James.

“He has surely made an indelible mark on our country,” said Green.

Ambassador Derick Heaven, current chairman of the AIJCFA and who has had significant policy differences with Rickards over the years, admitted that the late lobbyist’s combative style made him an engaging stakeholder at the bargaining table.

“We have had our disagreements in the past, but that is the nature of Allan. He was not one to hold a grudge,” Heaven told The Gleaner.

“... He is going to be sadly missed because although term limit had eliminated him from the chairman of the cane farmers association, he nonetheless continued to give sound advice in the cane farmers’ interest ... .”

Heaven also pointed out that Rickards was passionate about agriculture in general, not just the sugar cane sector, and would devote much of his time to influencing policy.

“He was always innovative and was always seeking out ways to get the policymakers to increase and improve the lot of the agricultural community. He was not afraid to raise issues with the powers that be, and did so in a forceful manner that brought results, where otherwise it would have been swept under the carpet.”

Richard Pandohie, the chief executive officer of the Seprod Group and president of the Jamaica Manufacturers’ and Exporters’ Association, said he will miss the many spirited debates he and Rickards had.

“Irrespective of our differences in opinions, I could not help but admire Allan’s passion, conviction, and zest for life,” said Pandohie.

Liu Chaoyu, CEO of the Chinese-owned Pan Caribbean Sugar Company, described Rickards as an unrelenting advocate for the cane farmers.

“He was never one to pass on the difficult tasks to his subordinates, even in his later years, whether or not it required a lot of time and energy,” said Liu.

“He was always willing to share his vast knowledge of the sugar industry and approach the many problems faced in a pragmatic manner, which resulted in both sides feeling like winners at the end of the day.”

Rickards’ most recent project was the formation of Trelawny Pride, an organisation created to help cane farmers displaced by the closure of the Long Pond Sugar Factory in Trelawny. Through his negotiation skills with the Government, more than 3,600 acres of land surrounding the factory were leased to farmers.

Rickards, who hosted a popular radio programme on agriculture on Power 106 FM, is survived by his wife Claudette Rickards, former councillor in the Trelawny Municipal Corporation, and his children.