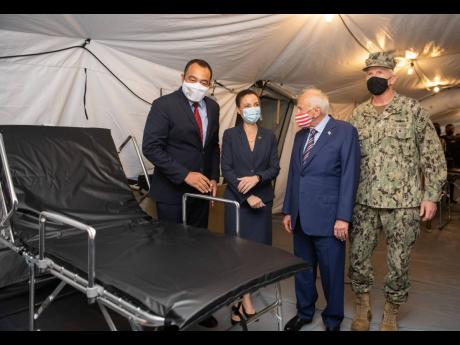 Three private laboratories have been granted permission by the Ministry of Health & Wellness to test for the coronavirus which causes the COVID-19 disease, significantly bolstering the nation’s testing capacity and reduce the turnaround time for results from days and weeks to 24 hours.

The three now complement the two public facilities – National Public Health Laboratory (NPHL) and the COVID-19 centre at the University Hospital of the West Indies (UHWI) – to now test for the virus, which has resulted in at least 119 deaths locally with over 6,795 persons infected since March.

The commissioning of the three laboratories is hoped to produce results much faster for front-line workers, including security personnel who have complained of delays in knowing their statuses. Testing challenges are believed to be behind a recent policy change that no longer requires a negative COVID-19 test for persons to end their period of isolation and be deemed to have recovered from the virus.

As the country remains in the throes of the community spread of the virus and complaints mount about inordinate delays in getting results, Health & Wellness Minister Dr Christopher Tufton told The Sunday Gleaner on Friday of the accredited private laboratories for COVID-19 testing.

“Aldo Micro Laboratory, Technological Solutions Limited and CARIGEN are the three. The three are private entities and they charge for tests. The UHWI and NPHL don’t charge,” he said.

The UHWI’s testing capacity up to three weeks ago was 948 per day if it has adequate human resource personnel. It is not clear what is the current capacity of the NPHL.

Last Wednesday, during an appearance on TVJ’s current affairs programme ‘All Angles’, Chief Medical Officer Dr Jacquiline Bisasor-McKenzie said that there was currently no COVID-19 testing backlog. This is, however, contrary to complaints of results being outstanding for three to five weeks among some categories of workers.

The Sunday Gleaner was unable to locate Aldo Micro Laboratories, but Technological Solutions Limited (TSL) is located on Cargill Avenue and CARIGEN on the Mona campus of The University of the West Indies, both in St Andrew.

Chief executive of TSL, Dr Andre Gordon, said that three months ago, his company began offering a suite of state-of-the-art analyses, from testing of high touch surfaces as well as to check if the virus is present in the air. The technology, which is only available through TSL, was made possible following a deal inked through partnership agreement between the company and United States-based company Invisible Sentinel/bioMerieux Technology. This saw a build-out of the capability as well as outfitting of a new state-of-the-art laboratory.

Gordon expressed frustration with accreditation process just over a week ago when he spoke with The Sunday Gleaner, noting that while TSL was accredited by the American Association for Laboratory Accreditation, it was having difficulty making the grade here.

He said that while the company’s focus remains surface testing, individual testing was being done on a small scale.

Following the health minister’s disclosure of a nod being given to TSL, Gordon said the company was the only laboratory which has consistently provided test results in 24 hours or less.

The Sunday Gleaner was unable to reach Compton Beecher, who heads CARIGEN, which began offering services to the Caribbean in 2009.

Our news team has been contacted by a number of individuals who say that private labs are offering COVID-19 testing services at a cost of US$150 or the Jamaican equivalent. This reporter was also pointed to other labs – not among the three named by the ministry – charging an average of J$22,000 per test with a turnaround time of three days.

Fifteen-minutes rapid-testing services are also being offered, minus doctors’ fees.

For Tufton, increased testing and results turnaround will aid in the quick separation of individuals who require hospitalisation, especially those with existing co-morbidities or underlying medical conditions. Many are to be housed at the field hospitals, one of which was handed over to the Government by the United States last month under its Humanitarian Assistance Programme Projects (HAPP).

Initially, it was reported that the US would donate two hospitals to the island, one on the grounds of the National Chest Hospital to house 40 patients, and another for 30 patients at St Joseph’s Hospital, both in the Corporate Area.

Tufton said the National Chest Hospital field facility is the “one facility we will get from the US.

“What they say is that the hospital is modular – you can add pieces to it – and you can add more beds, depending on how you choose to man it. So they say there is enough space for 70 beds,” Tufton told The Sunday Gleaner minutes after the facility was handed over two Thursdays ago.

“The medical team would determine who goes where because not all COVID patients have the same symptoms and require the same treatment. Where there are more severe cases, the traditional hospitals would work; the not as severe [cases] would be here,” the health minister said.

Staff for the field hospital and other help in existing facilities will be provided by 121 medical officers commissioned recently as well as with assistance from a Cuban medical team propping up COVID-19 response in the island.

Negotiations are currently under way with a Canadian firm, and another two hospitals are slated for the St Joseph’s Hospital grounds and one at the Falmouth Hospital in Trelawny. Plans had also been announced for one in Mandeville, Manchester.

United States Navy Admiral Craig Faller, commander of the US Southern Command, said Jamaica was at the top of the list of beneficiaries under HAPP.

A request for information on other US donations to other nations in the region was not answered up to press time.