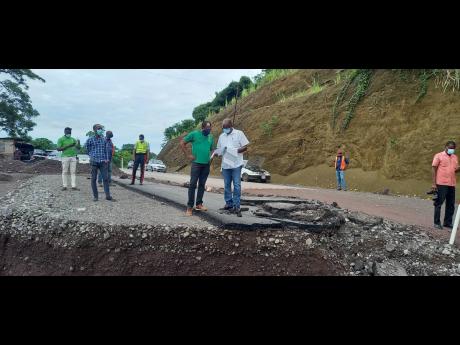 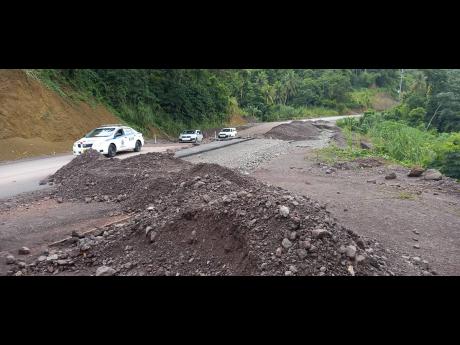 Photo by Gareth Davis Sr
Motorists driving by a section of the collapsed roadway at Chovey in St Mary.
1
2

It will cost taxpayers approximately $321 million for the reconstruction of a section of the roadway at Chovey in Junction, St Mary, which was extensively damaged during heavy rains more than three weeks ago.

Government minister Everald Warmington, who has responsibility for works in the Office of the Prime Minister’s self-styled Ministry of Economic Growth and Job Creation, said that arrangements were in place to address the section of roadway that has been plagued by issues for some time.

“We didn’t have the funds. The cost is $321 million and that was approved last week in the Supplementary Estimates,” he said.

“The design wasn’t done since we have this collapse here. It was in the works for quite some time and they have asked for funds to do the carry-on contract because they knew what was happening here. ... The work is something that we intend to start very, very early to ensure that this problem doesn’t occur again,” said Warmington.

The September 28 collapse of a section of that roadway had resulted in vehicular traffic being rerouted through Richmond. Since then, the National Works Agency (NWA) has restored temporary access to the corridor.

Roger Smith, director of technical services at the NWA, pointed out that the construction of a series of reinforced concrete diamonds will be used to reinstate the damaged Chovey roadway.

“Those diamonds will be used to retain the embankment on which the road is finally constructed,” he said, adding that there will be additional drainage features.

Member of Parliament for South East St Mary Dr Norman Dunn said the works will alleviate the challenges faced by motorists since the latest collapse.

“From I was a little boy this has been happening, and I think the time has come now for us to find a perfect solution to this. So we look forward to the solution that has been designed,” Dunn said.