We will not be bowing to lawless street vendors – MoBay mayor 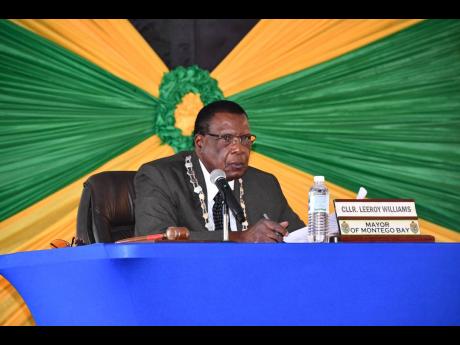 Despite the expected resistance from some street vendors, Montego Bay’s Mayor Leeroy Williams remains resolute that the recent decision to put an end to vending on St James Street in the heart of the downtown section of the western city, will not be rescinded and has declared that any acts of resistance will be met by legal action.

In a recent follow-up meeting to the one held earlier this month with the vendors, who have been plying their wares along the busy thoroughfare, much to the chagrin of legitimate business operators and motorists, Williams made it clear that he will be firm and decisive in ensuring maximum compliance.

“With this ultimatum now in place, I am expecting that all the vendors along the stretch of St James Street will take the necessary actions to relocate their operations to areas designated as vending zones because if they don’t, they will face tough sanctions,” said Williams.

Having taken the time out to meet with the vendors twice, and having explained the reasons for the decision and the allowance made to facilitate at the designated vending areas, Williams says he will be intolerant of anything besides full compliance.

“Everyone will agree that the St James Municipal Corporation has been very lenient insofar as allowing vending along this major thoroughfare,” said Williams. “However, we are now moving to retake the space and I am confident that the vendors will cooperate. They have been given ample notice to vacate the area.

“Those who resist will face strong actions, which will include seizure of their goods to prosecution and even being banned from vending in the parish,” added Williams, who recently took over the reins from the equally no-nonsense former mayor, Homer Davis.

This latest stance by Williams, which is just the last of many previous attempts to move the vendors, is being met with much scepticism by a least one legitimate business owner.

“I wish the mayor good luck…I had heard many announcements before and they have all come to nothing because while we get the big talk and the promises, the enforcement usually ends after a few weeks,” the businessman, who asked not to be identified, said. “At nights, it is just absolutely lawless, we have more food carts on the street than the market and you have what I would call rolling cookshops. I am tired of all the talk; I want to see consistent action.”

The businessman also expressed much frustration with the increasing number of prostitutes who can be seen roaming the streets of downtown Montego Bay from as early as 6 p.m.

“The mayor and the police also need to do something about these half-naked prostitutes, who are roaming the streets and soliciting openly … they are just as disgusting as the vendors as they have taken harassment to another level,” added the businessman.

Unlike his predecessors, the mayor is cautiously optimistic that he will be the man to reclaim the streets from those engaging in illegal activities.

“The JCF (the Jamaica Constabulary Force) has given the corporation their assurance that they will be fully enforcing the no-vending law and will be adopting a zero-tolerance approach to vending along St James Street,” said Williams. “They have been observing the space and are fully aware of the areas where the breaches are taking place and will be moving to take corrective actions.”