Child with ‘brittle bone’ gets wheelchair for Christmas 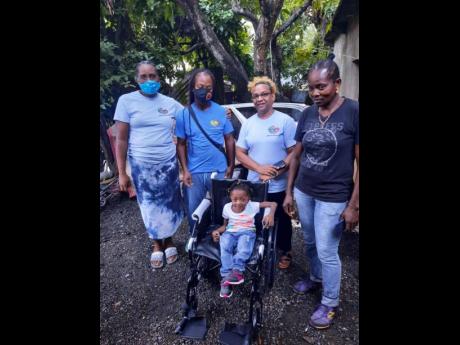 Photo by Gareth Davis
Dominique White sitting in her brand new wheel chair, surrounded by members of the One Hart One Hill Foundation.

Stricken with a health condition commonly known as ‘brittle bone’, seven-year-old Dominique White of Orange Bay, Portland, has received the perfect Christmas present in the form of a wheelchair to assist with moving about.

The child, who had to be assisted to move around, is the youngest person to have benefited from the One Hart One Hill Foundation, which was established in March of this year after its founder, Michael Coombs, contracted the dreaded COVID-19.

Coombs, who lives in the United States, explained that following his encounter with COVID-19, a decision was made to first form an online group, which later materialised into a foundation – attracting approximately 140 members.

“These members are drawn from the United States, the United Kingdom, Canada, Jamaica, and parts of the Caribbean,” said Coombs.

He added: “Our aim is to assist needy residents living in Hart Hill by providing them with care packages every month, medical assistance, construction, and to provide education assistance. We have since extended our outreach to other communities in west Portland. We were touched by the unfortunate situation facing the child (Dominique White), who was unable to walk on her own.

“Having learned about her situation, we all decided that this was a real emergency which had to be addressed immediately. The need out there is great, and our motto, which reads ‘Improving lives one heart at a time’, is a testimony of what we do. When we started out, we had about 10 people, but it kept growing. We have taken on renovation of homes that are without bathroom or kitchen. Currently, we have a GoFund Me account and we have been trying to get registered for a while, which is probably held up due to the COVID situation.”

White underwent hip surgery recently, but due to her fragile state, a bone in her knee was broken. According to Coombs, the foundation will continue to spread the love throughout this Christmas season, New Year and beyond.

Meanwhile, another member, Barbara Williams, said since the launch of the foundation in March, requests from residents have been pouring in, especially in the area of education grants and back-to-school assistance.

“We have provided grants for tertiary students and we have conducted back-to-school treats for infant, primary, and secondary students. We have also set up a sanitisation station at Hart Hill Basic School,” she said.

To contribute to the GoFund Me account of One Hart One Hill Foundation, if you chose to wire Savings Account – Swift Code. JNCBJMKX. Routing #840000077. Bank name National Commercial Bank.