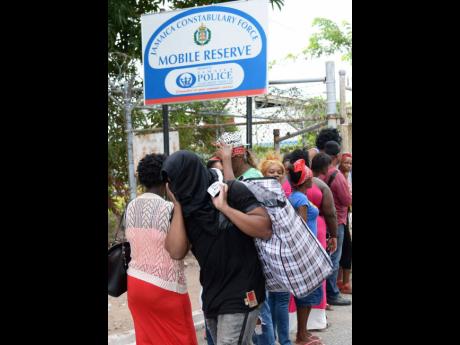 File
In this September 2016 photo, a Jamaican deportee from the UK leaves the Mobile Reserve police post in St Andrew, after being processed.

More than 500 Jamaicans were sentenced in the United Kingdom (UK) to at least 12 months in prison over a four-year period ending in 2019.

The staggering figure comes as the British government, under fire for what lobby groups there describe as inhumane and questionable deportation practices, signals its intention to ramp up the repatriation of Jamaicans.

The UK Borders Act 2007 mandates that a deportation order must be made in the case of a foreign national who is sentenced to at least 12 months in prison.

A total of 523 Jamaicans were slapped with a prison sentence of one year or more by the British courts between May 2015 and September 2019, according to statistics released by the justice ministry in the UK.

“[We] can confirm it is information provided by the [data] team,” the Ministry of Justice said in an email response to The Sunday Gleaner.

The offences for which they were convicted were not disclosed.

“The UK courts are pretty severe. For someone to get a sentence of 12 months or more, it’s not a small crime,” said Asif Ahmad, British high commissioner to Jamaica.

The number of Jamaicans imprisoned for at least a year was only surpassed by nationals from six of the 172 countries included on the list and represented approximately 75 per cent of the 702 Caribbean nationals.

Over the 51-month period covered by the statistics, a total of 15,948 foreign nationals were sentenced in the UK to a minimum of 12 months in prison.

But in a move that would unleash a wave of convicted criminals on Jamaica and other countries, UK Home Secretary Priti Patel now wants to make deportation orders mandatory for persons who are given a six-month sentence.

“What the home secretary has said in recent weeks, though it hasn’t been enacted yet, is that her preference would be to reduce the deportation criteria from 12 months’ minimum prison sentence to six,” Ahmad said during a recent interview with The Sunday Gleaner at his New Kingston office.

“So, anybody who has been sentenced to six months or more will become subject to deportation. If that law is passed, then we will see greater numbers globally of UK deportations because more people would be in scope,” he predicted.

The British envoy did not give a timeline for the proposed legislative amendment, but deportation opponents in the UK say they expect it to be tabled in Parliament “possibly in the next couple of months”.

Passage of this legislation means Jamaica, which is already struggling to contain murders and other major crimes, would see a sudden spike in deportations, warned Bella Sankey, director of Detention Action, a UK-based lobby group that works with individuals facing removal.

“I think it is absolutely inevitable,” Sankey told The Sunday Gleaner.

The Jamaica Constabulary Force, through its deportee monitoring unit, keeps track of Jamaicans forcibly removed from other countries. Senior police officials, however, declined to comment on the likely impact of a surge in deportees convicted of serious crimes overseas.

A total of 2,234 Jamaicans were deported from the United States, the UK, Canada and other countries in 2018 and 2019 combined, according to the 2019 Economic and Social Survey Jamaica.

Describing the UK deportation system as flawed and chaotic, Sankey suggested, too, that more individuals would have their rights infringed.

“Over the last 20 years, more and more safeguards against deportations have been stripped away, making it easier and easier to deport, and that’s why we see such cases of real unfairness and harm, particularly to children,” Sankey said. “The more you widen the net, the more people will get caught up in it and the more disproportionate the penalties are … from every angle, legally and socially. Thousands more people will be caught in this dragnet; it makes no sense.”

Deportation has become an increasingly contentious issue for the UK since the Windrush scandal came to light in 2018. Critics complain that the process disproportionately targets some groups and lacks transparency.

They cited, as an example, the refusal of the Boris Johnson-led administration to provide a breakdown of the nationalities of individuals who were deported in the last five years for committing crimes. The information was requested by the Guardian newspaper under the Freedom of Information Act.

The Home Office, in refusing the request, acknowledged that the information was available, but said releasing it “was likely to prejudice diplomatic relations between the UK and a foreign government” as well as to “prejudice the operation of immigration controls”.

The newspaper has appealed the decision.

But Ahmad, like the UK home secretary, has pushed back at the critics, noting that there is a “human story” behind each deportation case and insisted that, where possible, enforced removals will continue.

“If you speak to our home secretary, she wants, globally, for the process to continue,” he said.

Thirty-seven Jamaicans narrowly avoided deportation from the UK last month after a flurry of last-minute court rulings. One elderly man was taken off the specially chartered flight 10 minutes before its scheduled departure.

Among those who were allowed to remain in the UK were a convicted drug dealer who was sentenced to a minimum of 18 years in prison for murder and attempted murder, and another man who was given a six-year prison sentence for rape, according to a report by the Daily Mail newspaper last month.

“People are forgetting that there are victims of these crimes … of extreme violence, of sexual assault, of homicide and others,” the British diplomat argued. “They have the right, as citizens, to be assured that their government has not simply harboured these people in prison then left them free to reoffend.”

He said British authorities have seen cases of individuals committing crimes while they await deportation. “So between serving [time in] prison and being rounded up for deportation, you discover that there are fresh lines of criminality”.