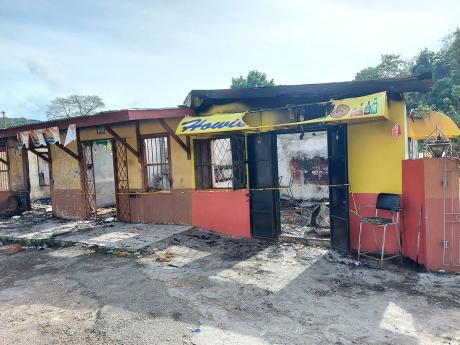 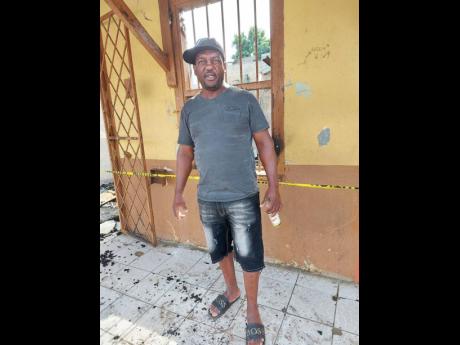 The early-morning phone call bearing news of misfortune is still ringing in the ears of three business owners of Mile Gully who lost all their merchandise valued at approximately $10 million.

The Nash & Son Funeral parlour, two bars, and a cement store were ravaged by fire on Tuesday.

Reports are that about 3 a.m., flames were seen at a section of the building. An alarm was raised and the fire brigade contacted.

But, according to eyewitnesses, by the time the unit reached the scene, it was too late.

“I went to open my bar door and I realised that the fire had already engulfed the building. I couldn’t do anything again,” said business owner and fire victim Howard Parkes.

“I just stepped away because my life values more. I just had to watch it burn.”

Parkes, who rented the space and operated the cement store and bar, said he had just recently purchased a freezer and done extensive renovations.

“We also had a gaming area in the bar, because a friend of mine had purchased and installed about 11 poker boxes and all of those burn up,” he told The Gleaner.

“Me go through a lot of downfall, but me always rise.”

Among the items he lost were liquor, fans, and a monitor box.

Parkes said over the next few days he will have to go back to the drawing board and find the next best options as he seeks to move forward.

A representative of the funeral parlour who spoke to The Gleaner on condition of anonymity said this was the second major loss the operators had experienced. The owner of the business was reportedly killed by gunmen in 2019.

The parlour lost more than $2 million in the fire.

“All the caskets, heat-press machine, laminating machine, computers, everything. This was our only office and now everything gone,” the representative said.

Deputy Superintendent Rohan Powell said that the fire, which engulfed the nine-room structure, could have easily caused more damage because of the proximity of other businesses.

The cause of fire is still being investigated.