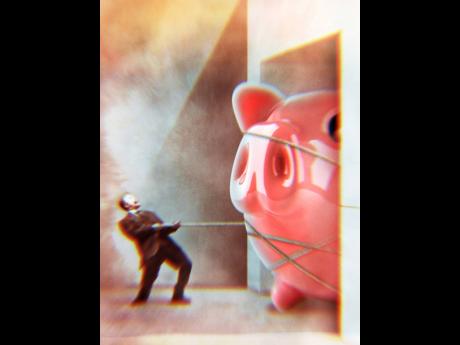 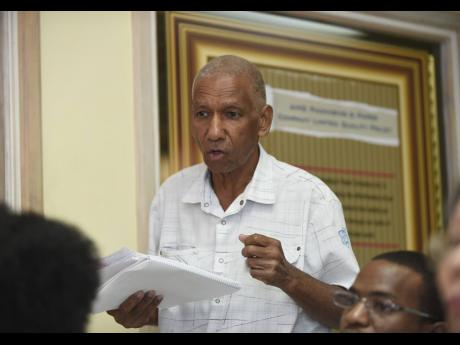 File
Shareholder Orrette Staple poses a question to the board of a local company at a 2018 annual general meeting. 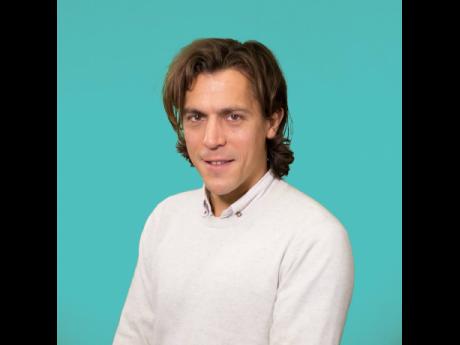 In 2019, the average pay for the chief executive officer (CEO) of a commercial bank in Jamaica was $47 million, based on a Sunday Gleaner analysis that gives a rare glimpse into executive compensation amid a simmering call among shareholders for more detailed disclosures.

An outlier of $2.5 billion was not calculated in the average.

The investigation, which looked at pre-tax salaries paid by six of the eight publicly listed commercial banks operating here for 2017-2019, did not make a regional comparison as that kind of data has proven difficult to obtain.

There’s no regulatory requirement for the disclosure of individual compensation of top executives, but there is a question of how long that may continue, given the growing ‘say on pay’ movement in European and North American jurisdictions.

While The Sunday Gleaner will not reveal the names of the executives or their institutions when discussing the salaries for security reasons, an analysis revealed that the 211 most senior banking executives in Jamaica for the period 2017-2019 earned approximately $12.2 billion in cash.

The gross emolument in cash for the period for just CEOs was $4.8 billion.

With $235 million, Bank B’s CEO was the highest paid for the three-year period, while the lowest was Bank C’s, who received $111 million.

Compensation packages at the highest level tend to include a basic salary and variable pay, which can range from bonuses, time-vested stock or options which may be tied to performance, houses with staff for CEOs, and the usual benefits such as motor vehicles.

For several shareholders of the institutions examined, the figures are the closest they have come to knowing the actual compensation for the most senior executives.

“They give you a lump sum,” argued Orrette Staple, referring to the line item in banks’ annual reports which indicates the amount paid in wages and salaries to all employees for a financial year.

A slight idea of how much an executive gets could be had from another line item referred to in most reports as “key management personnel”, which is limiting as that usually only includes the key executives who form part of the board of directors.

“It should be clear,” said Staple, who holds shares in Scotiabank and NCB, a member of the NCB Group which is the largest of its kind in the Anglophone Caribbean.

“It should not be a line item of $10 and then you’re speculating that out of that $10 those two members will get 60:40 ratio. I would like to see specifics,” Staple continued.

Shareholders have a ‘right’ to the information and a compromise could be the disclosure of the CEO’s pay.

Limiting union demands are a major reason why the banks may be hesitant to disclose the compensation package for key executives, said Staple, who insisted that he has “no objections if executives are being paid handsomely, but it must be within reason”.

“If employees should know what the top executives are earning then the union within the organisation would be able to drive home more clearly an increase for the employees,” he said, tapping into another debate over the disclosure and the importance of knowing the pay ratios to determine whether lower-level staff is being fairly treated.

Staple, known for his frankness at annual general meetings, was the only shareholder willing to have his name published.

“Why can’t we even know what the top cohort is getting?” questioned another investor, who spoke on condition of anonymity. “Soon, soon, we’re going to have to deal with giving shareholders more than just a line for general wages. These top folks are taking serious risks with our money.”

STAFF NEGOTIATING IN THE DARK

Four of the seven banks this newspaper questioned about compensation disclosure responded up to press time, affirming their adherence to the legal requirements for general salary disclosure and the international financial reporting standard (IFRS).

The International Accounting Standards Board, which is responsible for the IFRS, has been pushing reforms to improve disaggregation, although the issue of compensation is yet to feature prominently.

Scotiabank made it clear that it would not support local regulation to mandate the disclosure of individual executive compensations to shareholders.

“This would not be in keeping with international reporting standards and we would wish to maintain and protect the individual privacy of our employees,” the bank said in a statement.

“We are not of the opinion that the non-disclosure of an individual manager’s compensation undermines transparency,” it added.

Fees earned by directors are required to be revealed under the Banking Services Act, and Jamaica National Group said it ensures that the requirement is honoured.

“The Jamaica National Group is committed to transparency,” the company said.

CIBC FirstCaribbean, which is headquartered in Barbados, said it “prefers not to comment at this time”.

A senior executive at one of the banks, who didn’t want his name mentioned, said he “understands” the need for transparency, especially at the top.

“I know many of my senior colleagues don’t know what most of us are getting, much less the junior employees. You negotiate almost blindly – no benchmark and in the US it’s not. Economies are different. My concern is what the rogues may do,” he said.

Two employees of two of the financial institutions, whose salaries total less than $3 million per year, said they wished they had an idea of the compensation to inform how to negotiate the terms of their employment.

“I’m not just curious, but I would have wanted to know so I could have asked for a fair pay,” said one of the workers, who is a teller.

In the US, shareholders do get an input in determining executive compensation through the “say on pay vote”, a legal requirement.

At least every three years, most public companies are mandated to provide their shareholders with an advisory note on the compensation of their highest paid employees to enable the vote, which is usually non-binding.

The rules are similar in the United Kingdom, where companies must report CEO salaries and indicate how they match with the rest of the employers.

Those requirements are in line with the extensive rules on disclosure under the banking rules pushed by the Basel III, a voluntary regulatory framework that emerged out of the 2009 financial crisis.

The ‘say on pay’ tool is emerging as major mechanism to balance those objectives by driving improved corporate governance through stronger shareholders oversight while curbing excesses in the quest to reward performance.

For those reasons, and the fact that executive pay is a major expense item, High Pay Centre, a UK-based think tank that researches top incomes and corporate governance, believes more detailed disclosure is needed.

“When a small number of people are getting very large amounts of the business’ money, it’s important for stakeholders to understand that and to be able to interrogate the value that is generated,” the centre’s director, Luke Hildyard, told The Sunday Gleaner.

“Shareholders might ask if the money might be better used by returning it to investors; lower-earning employees could exert pressure to distribute some of the pay on social inequality, or about the impact that the structure of pay awards, including incentives, at systematically important businesses could potentially have on economic stability,” he added.

The latter point is a key driving force behind policy changes by US and UK regulators, key to prevent a repeat of the unchecked risks and perverse incentives that defined the financial crash of a decade ago.

It will require a major culture shift in Jamaica and the rest of the Caribbean whose jurisdictions are yet to join the march towards a more fulsome disclosure of even the highest paid senior manager.

Prior to the changes, US companies’ concerns ranged from a view that salaries were not material, relative to the performance of the company, and, therefore, no real benefits to investors, and that there was no substantive reason “to sacrifice” a matter of privacy, noted Marc Hodak, partner at Farient Advisors LLC, a US-based consultancy on executive compensation.

He said there was a view that revealing that pay amounts would put public companies at a hiring disadvantage relative to private employers, whose executives do not face that burden.

“Needless to say, in the US, these concerns were set aside and you can’t be listed on a US exchange without this disclosure,” he said, acknowledging that the overall compensation expense of banks “is clearly material”.

The precise details of managers’ compensation is “potentially” to mainly support the “window on governance” theory, which he said refers to investors’ belief that such disclosures give them a peek into the quality of a board’s leadership and decision-making.

Hodak, however, said the compensation details could be weaponised to “tamp down pay by inciting controversy about pay levels and general inequality”.

Security reasons cannot be ignored in the contemplation for more fulsome disclosure as called for by the shareholders.

A murder rate of 47 per 100,000 of the population has planted Jamaica decidedly among the top 10 countries with the highest homicide rate, a symbol of the struggles to deal with a persistent crime and violence problem.

That is precisely why Jamaica’s regulations on compensation disclosure cannot simply follow global trends, argued Densil Williams, a professor of international business at The University of the West Indies, Mona.

“If a CEO on Wall Street discloses their salaries, for the average man to know who that CEO is, it’s very unlikely. But, when you live in a small society like Jamaica, … it’s very, very likely,” he said.

Added Williams: “You’re exposing people to all kinds of unsavoury behaviour if people know what executives are making, and especially in small societies with high levels of crime and violence. You really don’t want to go that route at all.”

At least one of the local banks that responded highlighted its worry about disclosure and potential for harm.

It would be not be “prudent”, JMMB said, to disclose the salary details “unless there is a regulatory requirement, as this could place all our team members at risk from non-law-abiding individuals”.

Williams also noted that salaries have to be considered in the context of the risks senior managers take on and the heavy personal costs should they fail.

“Executives at very high levels in these high-risk positions can be here today and gone today … . Remember, you don’t have union protection, don’t have all of the protections that a normal employee has. You have to compensate for that risk.”

Whether Jamaican authorities will push for more disclosure from its listed banks is nowhere near clear and the Jamaica Stock Exchange (JSE), which regulates aspects of reporting, did not give a specific answer when asked if it would support regulatory changes.

Its interest, however, is clear.

“We support all disclosures that will give more information on costs versus benefits, and information that would allow for assessment of whether policies including compensation policies are effected,” the JSE said, noting that reforms are gradual.