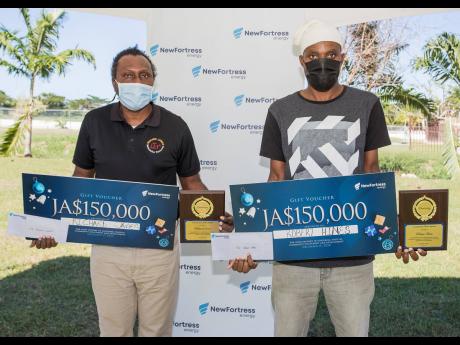 Contributed
Richard James (left) and Robert Hines from Montego Bay display their prize money after being recognised as the 2020 New Fortress Energy Community Heroes for St James at a ceremony recently.

The two recipients were recommended by their peers for recognition and award, which forms part of an initiative by New Fortress Energy to identify community heroes from the three parishes where it has its natural gas plants – Old Harbour Bay, St Catherine; Hayes, Clarendon; and Montego Bay, St James. The nominated individuals should embody selflessness, kindness and the spirit of volunteerism.

Hines was recognised as the leader and founder of the Dynamic Men in Action (DMIA), a group that provides mentorship to young men, especially those who are unattached and unskilled, in the volatile Flankers community.

Buoyed by the fact that his efforts to make a difference in his community has not gone unnoticed, Hines accepted the award with much humility, knowing that the DMIA’s work must continue if they are to rescue more wayward young people.

“To God be the glory for this recognition. If I can help change the life of one young man, I am happy and give thanks to God,” said Hines. “I feel encouraged to continue to help in any way that I can. A big thanks to New Fortress Energy for even conceptualising this initiative. God bless you.”

James, who has become renowned as an online mathematics tutor of much repute, caught the attention and respect of his peers at the onset of the COVID-19 pandemic. When many schools were forced to close their doors, creating major dislocation among students, he offered free online mathematics tutoring on YouTube, helping students to prepare for their CSEC and CAPE exams. In September, he was rewarded when one of his students, a 12-year-old from Cornwall College, received a grade two in CSEC mathematics.

According to James, the Richard James Online Mathematics Resource Centre was envisioned in 1996 when he realised that students throughout the Caribbean were going to need mathematical resources to fully prepare themselves for the future.

“I am very proud of New Fortress Energy, who takes the time to understand the needs of the most vulnerable and recognise individuals who are fostering community development and nation-building,” said James. “I also thank NFE for funding the Internet connectivity for my online mathematics sessions during the crisis (COVID-19) to make it possible for so many students to get the help they needed to prepare for, and be successful in, their exams.”

Verona Carter, who serves as a vice-president at New Fortress Energy, said her organisation is very much involved in the community and feel inspired to recognise and reward selflessness among the people.

“Our Community Heroes initiative is our way of encouraging individuals to continue to do good for the betterment of others. One act of kindness deserves another, and we’re delighted to recognise and reward these exemplary individuals that continue to give of themselves to make others and their communities shine brighter,” added Carter.

The four other awardees are Brettina Lloyd, a UWI law student, and Evon Campbell, a teacher, from Old Harbour Bay; Elder Carolyn Phillips and Marva Morgan, a part-time vector aide, from Clarendon.

The awardees were all presented with commemorative plaques and a cash voucher for $150,000 each.