Skip to main content
River As Friend And Foe 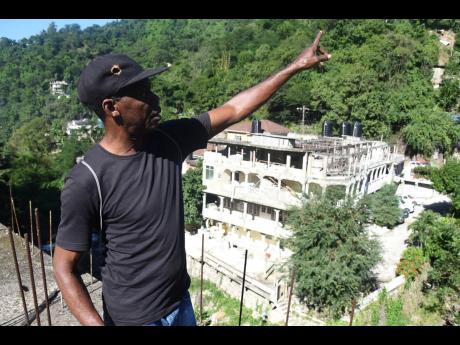 Kenyon Hemans/Photographer
Nigel Brown, who lives on the banks of the Hope River, stands on the roof of his home. He has feared the river’s wrath ever since his childhood friend drowned.

Fifty-three-year-old Nigel Brown finds peace in the rhythm of the Hope River when it’s hard to sleep, but the trauma of losing his childhood friend to drowning has kept him from trespassing beyond its banks.

Brown was 15 when the tragedy happened.

Hands covered in mango juice, the boys had raced down beaten paths in the hills to bathe in the river on a summer day.

Collie Motherscille, 18 at the time, went ahead of the crew and never lived to tell the tale. It’s the story everyone in Bottom Gayle Mount remembers.

That fear of water has spread to his own children, one of whom disobeyed Brown’s order to stay away from the river. His daughter almost died at the same spot Collie did. They, too, have never been back to the river since.

Despite the Hope River’s haunting, Brown hasn’t deserted the house left by his grandmother. With additions, it’s now a two-storey structure, and Brown has plans to rent it to students who are wooed by the coolness of the gushing river.

The river, he said, almost has a personality of its own - motivated by mischief. Its dancing descent over rocks induces a lullaby-like peace. But the river also holds the contrasting terror of Motherscille’s wailing desperation.

Brown still has many sleepless nights because of the threatening roar of the river.

“When mi see heavy rain and mi see the river look chaos in a certain way, I don’t really stay inside here. It kinda scary because you can hear the stones, the vibration, and the water,” Brown told The Gleaner.

“Hope River is not a friend, you know. It’s a foe because sometimes sun hot and it just come down because rain is falling up that side,” he said.

At nine years old, Howard Powell almost suffered similar river trauma. Now 58, he has vivid memories of a woman screaming for help when a swirling current took hold of her. While onlookers laughed and relaxed, Powell begged them to take her seriously. Grabbing a length of bamboo thrice his height, he extended it into the water and pulled her back to the bank.

Though the Hope River in general is known for its terror, Burrell, a hole that attracts people swimming, washing and bathing, has been labelled a feared centre of turmoil by residents in the Greater Gordon Town area.

The Wiltshire Spring is also a source of trepidation for communities in east rural St Andrew. Heavy rainfall gives the river outsize power. Residents in the Gordon Town area believe that the riverbed has got lower because of scouring and sand quarrying.

It is the great unknown that causes long-time residents like Nigel Brown to tread with caution. Swimmers, he warned, must be at one with nature, having almost bionic hearing to know when the river, at a moment’s notice, could be transformed from docile partner to devilish devourer.