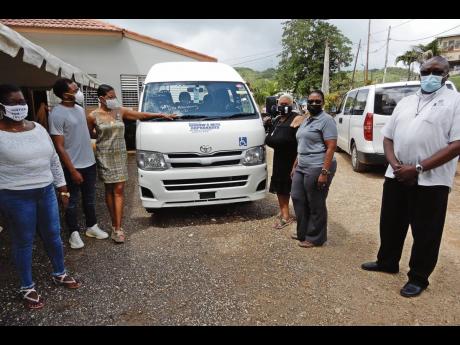 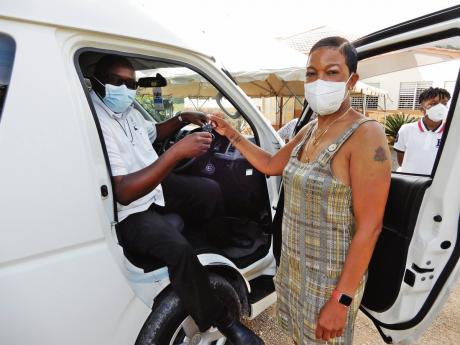 Contributed
Maureen Russell of Motra Foundation hands the keys of the Toyota Hiace bus to Father Garvin Augustine of the Mustard Seed Communities.
1
2

Mustard Seed Communities’ Widow’s Mite in St Ann is now able to transport wheelchair-bound children more comfortably, thanks to the California-based Motra Foundation, which on Tuesday donated a bus to the organisation.

In its first foray into the Jamaican society, the five-year-old charity organisation, formed by Jamaican Maureen Russell and her family, donated a wheelchair-accessible Toyota Hiace bus valued at over J$3 million to serve the children at Widow’s Mite, a residential home for abandoned children located in Murray Mount, St Ann.

The handover took place at Jacob’s Ladder, another Mustard Seed facility located in Haddon, near Moneague.

Father Garvin Augustine, who accepted the donation on behalf of Mustard Seed, praised Motra for its generous contribution which, he said, would greatly assist in the transporting of children at the institution.

Rakinne Foote told The Gleaner that is a family-based foundation that is seeking to give back to Jamaica, Russell’s birthplace.

“Maureen had a vision of helping people. She came from Jamaica and she just wanted to give back in the best way she knew, so this is the very first time, on the island, she has been able to make such a large contribution. It’s a family-based foundation; we would like to keep it in the family and give back in any way that we can,” Foote said.

The donation came about after Motra contacted Mustard Seed and offered to help in some way. A bus would be good, was the response.

Foote said the organisation is hoping to make life easier for the kids, even just a little bit.

“We hope to make their lives easier, even just by one per cent,” he said. “Make lives easier for those who really are just kind of forgotten about in society, or even those that maybe are disabled, sickly, or what have you; anything that will make life, even one person, easier, or make them one per cent happier. That’s what we’re hoping for, even for those who work here.”

Augustine admitted that there was some amount of scepticism “because people do that all the time (make promises) and it doesn’t pan out.”

“It’s a tremendous blessing, especially in these difficult times. To receive a donation like this at this time shows the tremendous generosity of the donor; and the bus, because it’s a wheelchair-accessible bus, it’s something we desperately need because of the population of children we care for,” Augustine said.

“So really, it’s a tremendous donation that we’re very grateful for, especially in these difficult times, to find that people still have it in their hearts to be generous to those who are in need.

“It’s also a testament to God’s grace, and we as people of faith. God looks after those in need; He has come through with us every step of the way,” Augustine added.

“There are approximately 500 children in homes operated by Mustard Seed Communities across Jamaica, with 20 of them at Widow’s Mite, where the bus will serve.”