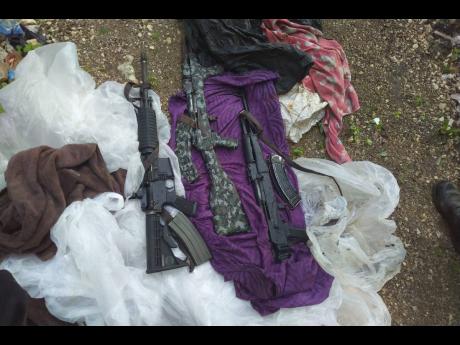 Contributed
The three high-powered weapons seized by a police-military team during an operation in Norwood, St James, yesterday. 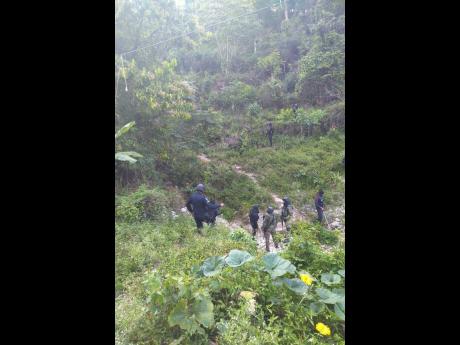 Contributed
Members of the police-military team combing a section of Norwood, St James, yesterday in search of illegal weapons.
1
2

The weapons – two AK-47 assault rifles and one M16 assault rifle– were found stashed in protective plastic in a section of the community where two rival gangs have been locked in a bloody feud, which has churned out several murders.

“It is a major operation in search of violence producers and illegal guns,” Superintendent Vernon Ellis, commanding officer for the St James Police Division, told The Sunday Gleaner. He pointed out that the team conducting the operation was made up of the police, the military, and the Caribbean Search Centre, with support from the Canine Division.

According to Ellis, the operation, which started at approximately 5 a.m., blanketed the community, sealing off access points. Indications are that it could span more than just one day.

In recent years, Norwood has been a hotbed of gang violence with clashes between the Hugar Lane and the Church Lane gangs, which are highly mobile and sometimes seek to settle their disputes outside of the community.

Popular entertainer Matthew ‘Rygin King’ Smith, who was shot and seriously injured in Bethel Town, Westmoreland, last June, is one of the high-profile victims of the lawlessness.

At the start of this year, things got intense with a spate of cross-border attacks and drive-by shootings, which accounted for the majority of the 38 murders recorded in the parish between January I and March 17. Several top-flight gangsters aligned to both gangs have been arrested in recent operations in the community.

Last week, the police claimed they made a major breakthrough when they arrested one of the community’s most feared gangsters and one of St James’ most wanted men.

“This individual has been creating mayhem and terror within the Norwood space, and so far, he has been linked to over six murders,” a policeman that took part in the midweek operation said.

Following a spate of murders in January, National Security Minister Dr Horace Chang, who is also the member of parliament (MP) for St James North Western, where the community is located, visited the area and sought to assure residents that every effort is being made to restore calm and bring the criminals to justice.

“The country has been calling on the State to act, and the State will act,” she said. “The level of brazenness and utter disregard for lives and public order cannot be accepted.”