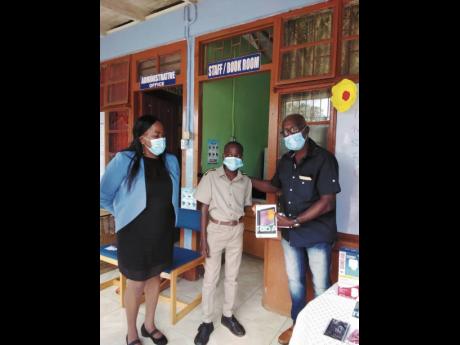 Contributed
From left: Principal of Devon Primary School Nadine Nembhard-Foster looks on as a student receives a tablet from Vernon Dixon, a representative of the Rachel Dixon Memorial Foundation. 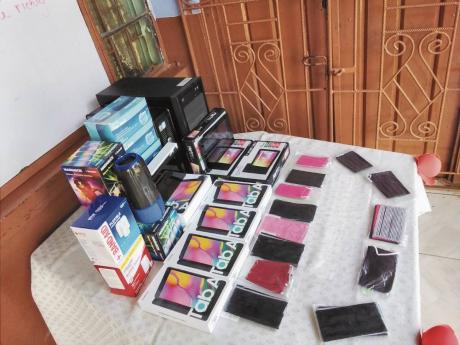 Contributed
Some of the supplies donated by the Rachel Dixon Memorial Foundation to Devon and Bethany primary schools.
1
2

Though it has been a little over a year since teachers and students were forced to operate online, several students remain without reliable devices to access virtual classroom.

This is why the Devon and the Bethany primary schools in Manchester are beyond grateful for a donation of 31 tablets, masks, sanitisation supplies, CPUs, speaker and other school supplies from the Rachel Dixon Memorial Fund.

Principal of the Devon Primary and Infant School, Nadine Nembhard-Foster, said the school has had to employ creative methods in its efforts to reach all children.

“This donation is very significant. Each year, we get school supplies, but this year the foundation has gone a step above all other years. We started our virtual learning in March and there are still students who are without tablets, so this donation is much appreciated,” Nembhard-Foster said.

She said the needy students and those who have exit examinations to complete are mainly those who benefit from the programme.

“We have our kindergarten students on the platform now, and for those who are not on the online system, we drop off handouts, mark their books, and return them at our two central drop locations. It’s good that the students are living in the vicinity so it’s easy to reach them there, and the drop-off and pick-up points are central so we are not facing any grave difficulties at this time.”

Vernon Dixon, local representative of the United States-based foundation, told The Gleaner that it was started by his brother Oswald, in memory of their mother and to give back to the community that formed a significant part of their childhood and that of their family.

“Our main aim is to make the lives of the students, particularly those at Devon and Bethany primary schools, better. Initially, we granted a scholarship to a student at Bethany and since then, it has grown with us donating computers, school supplies, laptops, and we have extended that to the Christian Clinic and the Percy Junor Hospital,” he said.

While the school population of 121 students is manageable, according to Nembhard-Foster, there is the issue of safety that needs to be addressed.

“We would welcome a perimeter fencing. We are doing so much and acquiring so much, but we would love to have this because we are plagued by simple larceny. The school has not been broken into, but when we set up our wash-hand stations and receptacles, we can’t leave them outside because we won’t come back to find them.”

She said she was hoping to have this implemented at the soonest possible time.