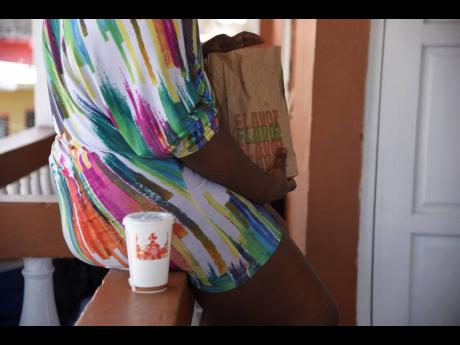 Nicholas Nunes/Photographer
A woman eats fast food on Tuesday. Obesity has been cited as a trigger of several non-communicable diseases.

The Ministry of Health & Wellness has launched a committee to provide assessment and practical advice on how to prevent and control non-communicable diseases (NCDs).

The committee, launched on Tuesday, consists of 25 members and nine subcommittees that will rally national multi-sectoral action for the management of all NCDs, Minister of Health and Wellness, Dr Christopher Tufton said.

NCDs account for at least 60 per cent of deaths in the Caribbean and, according to the Statistical Institute of Jamaica, were attributable to almost 12,500 deaths here in 2017.

“Given the statistics and social and economic consequences, NCDs have to be a major priority for the Government and public health system and should be for the citizens of Jamaica at large,” said Tufton.

Professor Trevor Ferguson, director of the Epidemiology Research Unit at the Caribbean Institute for Health Research at The University of West Indies, Mona, who is the chair of this national committee, said the goal is to reduce the burden of NCDs in Jamaica by 25 per cent by 2025.

He added that Jamaica is striving to meet sustainable development target 3.04, which is to reduce by one-third the 13 per cent of premature morbidities caused by NCDs come 2030.

Premature morbidity is considered as the death of persons 70 years and younger.

However, mental illness has recently been listed as a cause for concern of persons with NCDs.

Chair of the mental health subcommittee, Dr Earl Wright, told The Gleaner that it was listed around 2019 because of the burden of mental illness and its influence on other NCDs.

Wright, who is the immediate past president of the Jamaica Psychiatric Association and a consultant psychiatrist, explained that though there has been an increase in mental-health awareness since the coronavirus pandemic, the island has a long way to go in changing perceptions.

“If you ask the man on the street about mental health, what they are about is schizophrenia and madness, and that’s one per cent of the population,” he said.

The Jamaica Health and Lifestyle survey conducted in 2016-2017 shows that 14 per cent of the population had depressive symptoms.

“If we were to invest in the screening for depression, just one mental disorder, you will be receiving $60 billion [in productivity gains and social benefits] over 15 years, and if you spend $1 on screening for mental disorders, you are going to get $4.2 in return,” Wright said, citing a PAHO cost-benefit analysis on investment in mental health.

The subcommittees are scheduled to meet once every two months and their assessments reviewed by the national committee quarterly.