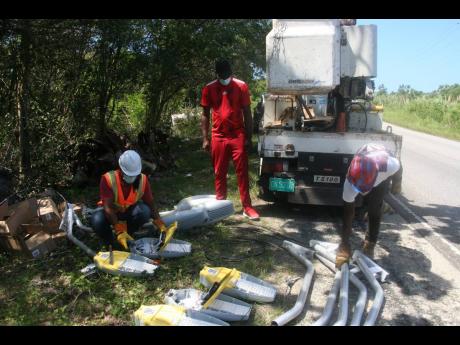 Residents along the Orange Bay to Negril roadway in Hanover and motorists who traverse the area are breathing a sigh of relief as after years of lobbying, 10 street lights have been installed at strategic positions along the much-used thoroughfare.

For three years, Marvell Sewell, the councillor for the Green Island Division in the Hanover Municipal Corporation (HMC), had been clamouring for street lights to be installed to make the thoroughfare safer.

The installation of the lights, which was approved by Minister of Local Government Desmond McKenzie back in 2017, was delayed over the years for numerous reasons. At one point, it was because of the lack of the proper wiring and other infrastructure, then they were installed in the wrong place, and ultimately, the wiring that was put in by the Jamaica Public Service Company (JPSCo) was subsequently stolen.

Sewell, who was on hand to witness the installation and energising of the lights, could hardly contain his joy.

“Words cannot explain how I feel right now because this project was from 2017, and I personally have to thank the minister (McKenzie) because when I wrote to him about this project, he responded within three weeks, and it took from then until now for these lights to be installed,” said Sewell, adding that he is sure that all the residents and tourists who use the thoroughfare will greatly appreciate the new lighting.

Sewell, however, is not totally satisfied as come the next sitting of the HMC, he will be requesting 10 additional lights.

“One of my concerns was that previously, if you have an accident or need some assistance, no one would stop for you along this roadway because of the darkness. Now, you would just need to get under one of these lights and others will be more eager to help,” said Sewell.

Sewell identified an accident-prone area in the vicinity of the Sand Creek Bridge, which he claims will be getting a lot of attention from him.

“Another thing that I would really like to see happen along this thoroughfare is the placing of a sand bed on the left-hand side of the roadway, heading from Lucea towards Negril, in the vicinity of the Sand Creek Bridge. A lot of accidents have occurred there, some even fatal,” stated Sewell, proposing a mechanism to act as a stalling area for vehicles that run off the road.

The lights installed along the Orange Bay to Negril roadway are 162-watt LED lamps, specially designed for placing along highways. Each comes equipped with an antenna, which can be monitored from the JPSCo’s offices, alerting them if they have been removed and also telling them how they are working in real time.