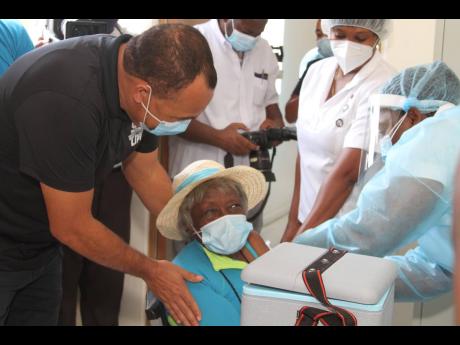 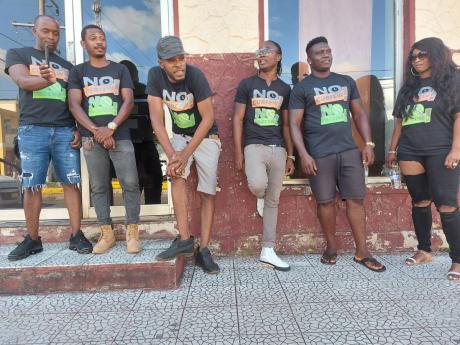 Photo by Tamara Bailey
Members of the entertainment industry protest in Mandeville against COVID-19 vaccinations and the nightly curfew on March 23. 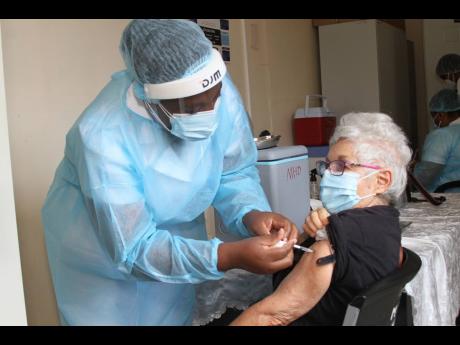 Concerns are growing that the immunisation of many elderly Jamaicans against the new coronavirus might be delayed because of India’s decision to halt vaccine exports temporarily due to surging cases and a high demand for inoculation in the subcontinent.

New s on Tuesday that 75,000 vaccine doses, under the Africa Medical Supplies Platform, will arrive tomorrow may ease anxiety, but Jamaica is in a race against time to hit its March 2022 deadline for 65 per cent herd immunity.

Jean Anderson, sister of late former prime minister Edward Seaga, is urging the Holness administration to explore all options to prevent the local inoculation drive from being derailed by vaccine shortages.

“It’s a war out there trying to procure for each country. The Chinese have a big supply and their vaccine is rated one of the highest across the world. I want my prime minister and minister of health to see what they can do,” said Anderson, adding the caveat of World Health Organization (WHO) approval.

A cancer survivor with hypertension and diabetes, Anderson would be aware that she is part of a cohort of the most vulnerable. The majority of Jamaica’s COVID mortalities were aged 60 and over.

The 87-year-old lived through the polio epidemic as a nurse in the United States and said she witnessed the value of prevention.

“When you had that polio, we had to put in an iron lung because they didn’t have the facilities they have now to help you breathe ... . So I am saying now, let’s take the best preventative measure,” said Anderson.

Minister of Health Dr Christopher Tufton, while touring the Mandeville Regional Hospital vaccination facility last Thursday, said the authorities continued to tap different markets for vaccines. A shipment of 20,000 doses of Moderna is set to arrive in weeks.

Moderna got emergency-use approval by the United States Food and Drug Administration but has not received the WHO’s seal.

“... India coming off the world market as a supplier will certainly create some dislocation and shortages ... ,” said Tufton, who has insisted that the Government will not yield on its dogma of WHO approval.

“We are cautiously optimistic, but it is more likely that we might see some delays than none at all and what we have to do therefore is to ensure that we maintain the protocols.”

More than half of the 64,400 doses of the Oxford-AstraZeneca have been administered since Jamaica commenced its vaccination programme on March 10, exactly one year after the first case was recorded here.

The pace of vaccination will erode the remaining inventory in two to three weeks, Tufton has theorised.

The minister has denounced what he has called vaccine nationalism – the super-hoarding of stock by wealthy countries, leaving the majority of the 190 nations under the COVAX Facility to scrounge for supplies.

“This is a very volatile marketplace and it is a global challenge ... . However, the chances of the market becoming a lot more available for vaccines are greatly enhanced,” Tufton said, citing the China-made Sinopharm and SinoVac, and Sputnik V which is manufactured by the Russians.

The minister said that 83 vaccines are under clinical trials globally, but only a handful have been approved by the WHO.

Tufton has described as unfortunate anti-vaxxer protests that have popped up in town centres. He is also concerned about deep-seated vaccine hesitancy across the country.

“Our life expectancy as a country has largely been influenced by our immunisation programme ... . The Government’s policy is very clear: We will continue to administer the vaccine and we encourage all Jamaicans to take it once they qualify,” he said.

There were protests in New Kingston and Mandeville last week, with demonstrators lambasting politicians for “selling out Jamaica”.

“We are here to take a stand and to let people know that it is not adding up. The curfew is not working, it’s been a year and add now and it’s the same tactic expecting the same result. It is ridiculous!” said Sean Stewart, popularly known as DJ Kentucky.

He argued that there is a “plot” behind the vaccination drive.

Paul Bailey, a promoter popularly known as Max Villain, said the prime minister was out of touch with ordinary Jamaicans in the streets.

“You lost you way and you lost big time… who him a get advice from nuh know Jamaica. You have to know Jamaica to govern Jamaica… This vaccine thing is not for me, me alright, me nuh foreign minded,” Bailey told The Gleaner.