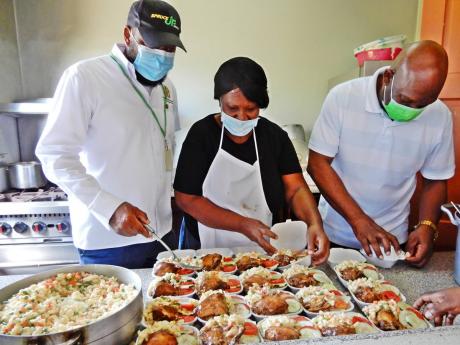 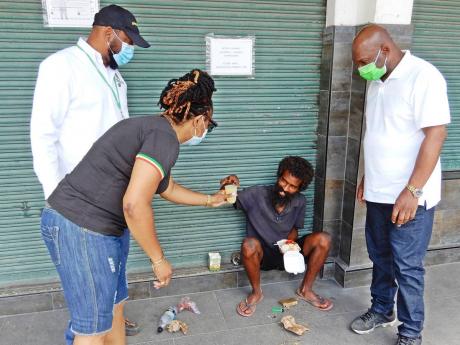 PHOTO BY CARL GILCHRIST
Councillor for the Lime Hall division in St Ann, Genevor Gordon-Bailey, offers a cup of juice to one of the street persons in Ocho Rios, who was involved in a conversation with Mayor Syndey Stewart (right) and former mayor and councillor for the Ocho Rios division, Michael Belnavis, on Good Friday. 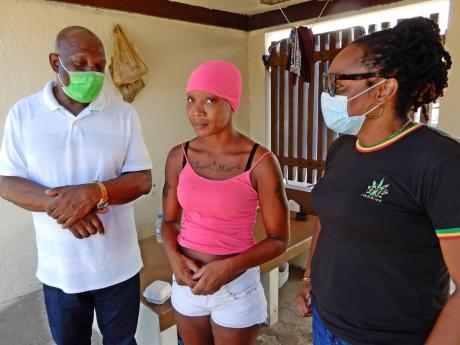 PHOTO BY CARL GILCHRIST
Simone Williams (centre) shares some of her experiences while living on the streets with Mayor Sydney Stewart (left) and Councillor Genevor Gordon-Bailey, on Good Friday. Williams is one of approximately 70 persons the St Ann Municipal Corporation targeted for feeding over the Easter weekend lockdown.
1
2
3

The St Ann Municipal Corporation has targeted approximately 70 persons living on the streets of major towns in St Ann to feed during the Easter weekend lockdown, which is aimed at curtailing the spread of COVID-19.

The initiative, which Mayor Sydney Stewart said was a directive from Local Government Minister Desmond McKenzie, has been tied with the ongoing feeding programme that the St Ann Municipality has in place.

“The feeding programme is an ongoing exercise. The municipality has decided to strengthen the exercise today by bringing in all the people and intensify the operation,” Stewart told The Gleaner.

“If we had any thinking of not doing it, the meeting we had with Minister McKenzie last Monday, we were told and instructed to ensure that (street) people get their food right through the entire lockdown.”

Stewart said based on the numbers received from the Poor Relief Department, “We are looking at approximately 70 people who are on the street who require this feeding programme each day.”

He continued: “We are going into all areas that we assume and were told that they (street people) sometimes assemble. We are doing that to find them and ensure that we give them a meal.”

“It is well appreciated from what I see,” the mayor said.