Mother says the disorder has nothing on her ray of ‘sonshine’ 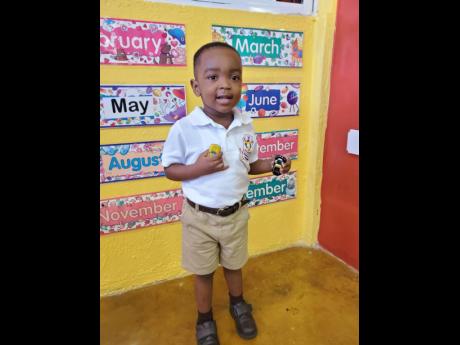 Contributed
Jahmar Randall in his classroom. 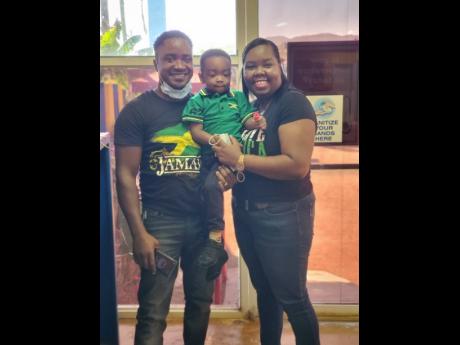 THE STORY of Janice Palmer-Randall and her husband, Carl, with raising a child with special needs is one of resilience and unconditional love.

“Initially, I was plunged into depression. I couldn’t stop crying because I knew based on my research that my baby would be diagnosed with autism. I cried for months. Every time I saw a mother with her child, I broke down. After a few months, I realised that if he is to get the help he needs, I need to pull myself together and focus,” Palmer-Randall told Family and Religion.

Not only is the couple set on making life the very best for little Jahmar, affectionately called ‘Sonshine’, but they are already poised to become great advocates for those diagnosed with Autism Spectrum Disorder (ASD).

Described as a developmental disorder that affects communication and behavioural skills, autism typically presents in children in the first two years of life.

“I noticed some differences at about 10 months old. He wouldn’t respond to his name or anything spoken to him, wasn’t saying anything not even babbling, constantly spacing out, wouldn’t socialise at daycare as the others did but preferred to stay by himself. I spoke to his paediatrician when he turned one year old about my concerns, adding to that he didn’t seem to be interested in walking. He (doctor) said some boys take a while longer to develop certain skills, and we should give him six months.

But after the six-month period had passed, Palmer-Randall was even more confused and filled with anxiety.

“He didn’t walk until 16 months. I went back to doctor at 18 months, and we were given an autism screening. Based on the responses, there was a 50 per cent chance he may be (autistic). We were then recommended to a specialist in Kingston, but by now, I was seeking out people who had autistic children and asking questions because I had so many.”

Palmer-Randall, who one year later received the official diagnosis for her son, said she was told to prepare herself for a long, expensive journey by other parents of autistic children.

Every day is a teaching moment for her family, but Palmer-Randall is committed to creating awareness and securing only the best for her son.

“He is three and still doesn’t have much communicative language. He knows a lot as he is extremely smart, but to communicate what he knows is a challenge for him. Also, he doesn’t eat any solid foods, so feeding him continues to be tricky. He will only eat cereals, including porridge, formula, juices, ice cream, and his favourite is yogurt. Good to grow yogurt is the world to him.”

She added: “My biggest worry is for him to be mistreated by people – both adults and kids. Because of this, I hover a lot when he is around persons outside of the immediate family. The teacher can attest to how often I call during the days or the barrage of questions she has to field when I come to pick him up. If a slight change is noticed in his behaviour, I will not stop until I figure it out. I don’t want anyone to think because he doesn’t speak in a communicative way yet, that he doesn’t communicate. I understand everything he says to me without him saying a word. What he will do is show, and he is good at that because that is also how he learns.”

A strong advocate for her baby, Palmer-Randall credits the support of her husband, immediate family, and friends, who she says continue to go above and beyond for ‘Sonshine’.

Having to assume a stronger role as teacher at the onset of the COVID-19 pandemic, young Jahmar, according to Janice, has been showing great signs of improvement and has debunked the myth that persons with autism cannot properly function in society.

“He is extremely smart. He will recite the ABC, count to 50, days of the week, months of the year, spell his name, identify the planets and recently started learning to read, among other things. He is just starting to use a crayon, though he still doesn’t hold it properly. He can identify every type of vehicle there is as that is one thing that keeps his focus when we go on the road. It was only a few months ago that he started identifying us as mommy and daddy, and this has me bouncing off the walls if everything else wasn’t already.”

To the Randall family and everyone who meets Jahmar, he is nothing short of a blessing

“He is absolutely the sweetest child, inside and out, and so full of energy. He is very affectionate and doesn’t have an ounce of aggression. He will just walk up to me and say “hug” and then proceeds to hug me. Funny thing, when I found out I was pregnant, I sat down and had a conversation with God and asked God for three things: That my baby be taller and more handsome than his dad, that he is a good and decent human being who looks out for others – he is heading there – and that he is super smart.”

She added:“With that request, I figure God in his infinite wisdom thought ‘Janice, the level of smart and intuitiveness you desire will only come if I make your son autistic’. So Jahmar is nothing short of a blessing.”

With a wish that her son knows there is uniqueness in being different – as all persons are, Palmer-Randall’s hope is that her son will learn to reinforce his strengths and work on his weaknesses, that more people will learn about ASD and that Jamaica will make services more accessible and economical for these special human beings.