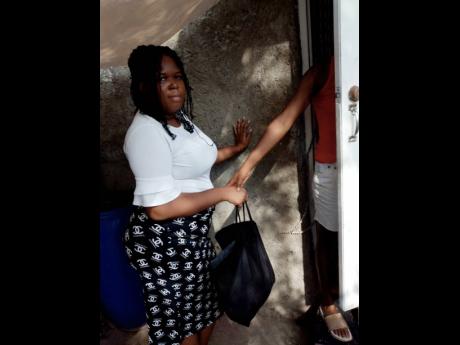 Contributed
Robinson speaks of the importance of spreading love.

It’s the lack of evident love in the church for Prophetess Shamailly Robinson which led her on a mission to change the narrative.

Speaking on the importance of actions over words when it comes on to the quality described by the Bible as ‘the greatest of all’, Robinson shared that she has witnessed churches offering only prayer when person needed a more tangible fix.

“Over the years, within the churches I have been seeing a lot of prayer, fasting, declaring the word … . However, what I have not been seeing is a lot of love. It is there, but I strongly believe that love should be the forefront of the Church, because God Himself is love. So if we do not have love, we do not have God.

Love isn’t saying ‘God is going to deliver’ when we know within ourselves that we are able to assist our brothers and sisters in Christ. I have been a member of the Christian society since I was six years old. I have seen persons stand before a congregation asking for prayer for a meal and the pastor prayed, collected offering, but refused to help that person in need. Is that love? God is not pleased,” she said.

The woman, who now attends the Hayes Divine Miracle Deliverance Church in Savannah Hayes, Clarendon, told Family and Religion that she recently received a vision from God revealing the deplorable state in which many have been living. Among these, she said, were people who have fallen victims to sin because they simply lacked help.

She continued: “The Church has been praying but, have churches been helping? I grew up in Windsor Heights, Central Village. Over the years, it has been well known as ‘Sufferas heights’. It pains my heart seeing so many elderly persons in need and so many young people falling victim to teenage pregnancy, guns and so on, all because of this poisonous venom called ‘poverty’, so I started a food drive.”

Robinson, who noted that she has since contacted various churches, locally and overseas, for support, shared that she has been using the food drive to help others and, at the same time, minister concerning the gospel.

She said: “I started to distribute items to the less fortunate. On a monthly basis, I would put my clothes on and step out as a young girl and visit the less fortunate with care packages comprising food items, toiletries and clothing. I would go by their houses and blend myself in as if I am living with them. If they are taking up clothes off the line, I help. If they are washing, I’m joining in and we sit and start a conversation about the Lord.”

Noting the popular scripture warning against doing charitable deeds to be seen of man, the minister told Family and Religion that, by sharing her kind actions, she hopes to inspire others to do the same.

According to her, “I want to be an ambassador and start a new trend so that mankind can see the art of soul-winning and reflecting what Christianity should be. We have pastors who are too ashamed to visit a person’s house who is financially challenged and sit down on a stone and encourage them. I have seen where many have gone for the rich and famous in order to get the offering, and us as leaders should be ashamed of ourselves. I would also like to big up my Bishop Devon Elliott who has moulded me into looking at Christianity from this point of view, and my spiritual mother, Apostle Gwendolyn Grey, who has pushed me and prepared me financially and spiritually for this mighty mission.

Ministry is not going into church for a hallelujah party. Ministry is changing lives. I want to encourage all religious leaders to go out there and work the field. God needs workers, not superstars. If being unable to find a meal is someone’s hindrance from heaven, then you need to fix that.”