Putting the coconut bough to good use 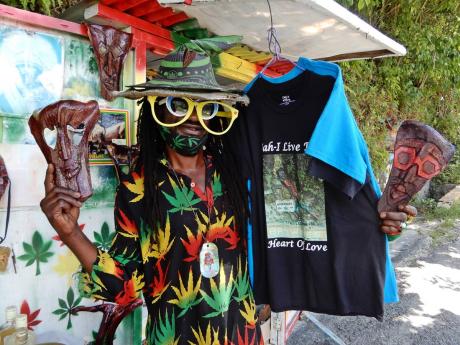 Contributed
Yah I with some of the masks and t-shirts he designed. 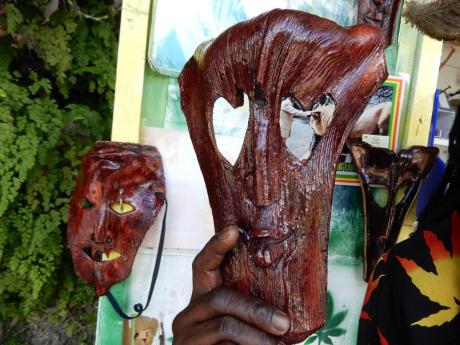 Contributed
Two of the masks which are made out of coconut bough. 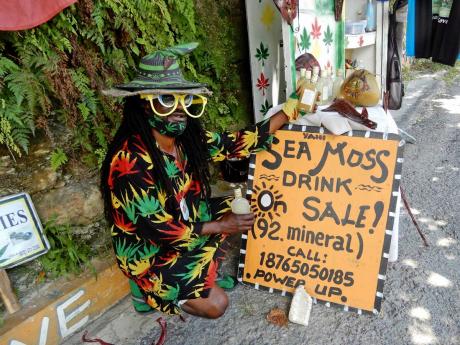 Contributed
Yah I with his sea moss drink.
1
2
3

For over a decade, self-described artist, community motivator, and herbalist Yah I steadily built a name for himself as the man who sells marijuana-flavoured brownies to tourists from his base along the main road in Lodge, St Ann.

Yah I told The Gleaner back in 2015 that he uses his own “secret recipes” to create what he has nicknamed the “happy cakes”.

But with the COVID-19 pandemic bringing the tourism industry to its knees, Yah I, like others who rely on the sector to earn an income, has found it difficult to survive.

Forced to find creative means to make up for the shortfall in earnings, Yah I has expanded his offerings to now include sea moss drink, his own line of T-shirts, and amazing creations using the coconut bough, a section of the coconut tree that is usually discarded as useless.

Yah I explained to The Gleaner on Saturday how he started using the coconut bough to make African-like and Halloween-like masks, and animal figures after a reasoning with the Lord.

“Mi wake up an’ mi seh, Lord, 2021, I want to do something that is new, different from last year. Mi nuh waa do the typical ting. Mi waa add something. Then again, I don’t want to do something that another brother or sister has been doing before here in Jamaica. So he turned to me an’ said, well, check out the coconut bough because when they dry off the tree, they are wasted,” Yah I said.

“And by looking at it, shapes start to pop in my mind ‘cause I’m an artist, so I have an artistic mind. And so I start working. Coco-Bough is the name of this brand from Yah-I, the brownie man.”

Citing that many masks are made of plastic, Yah I said that his masks are more eco-friendly.

“And we need more eco-friendly products out there. Anybody can do it. Once you can build I one cup out of bamboo, you can do stuff that are eco-friendly.”

Also describing himself as self-reliant and determined, Yah I said the pandemic has caused him to bring in other new products.

“Through a corona time, I a look forward to do something fi help people an’ I say, wha I can do as a Rastaman? Mi waa gi dem supp’m wha long term. They can look pon mi an’ say, ‘Bwoy Yah-I, you did me such a good!’ So mi come een wid di sea moss. Not like the sea moss was not around before, but in Jamaica wi call it Irish Moss.

“The sea moss has 92 minerals in it; our body needs 110 minerals to stay nutritionally righ. So with this having 92, you only need 18. We mix it with the linseed. Linseed has omega 3, which is good for your brain.”

“Mi drink it an’ mi feel di youthfulness a come back. Back pain, an’ all dem ting deh, everything gone,” he noted.

Two T-shirts hanging on his stall have the words ‘Yah I Live Roots Heart of Love’ printed on them and feature scenes from the stall and surroundings. They serve as samples to, hopefully, a successful project in the future that will see a roll-out of more designs.

“Yah I now has his T-shirt brand coming out,” the Rastaman stated. “It’s not fully functional. These two are the trials, but it is a vision. I think I am a man who interacts with people fi 11 years, a go inna 12, and I think I, basically, want to have something when I pass on – I leave something that my off-links dem can carry on as a gain.”