NWA to advance concept for easier access to Portmore 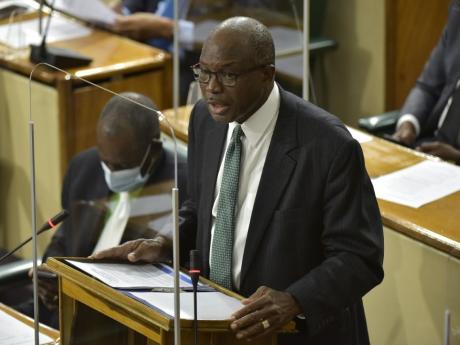 Minister without Portfolio in the Ministry of Economic Growth and Job Creation, Everald Warmington, making his contribution to the 2021/22 Sectoral Debate in the House of Representatives on May 5, 2021 – Contributed photo.

The Government has instructed the National Works Agency (NWA) to develop on a concept for more efficient access to Portmore, using the Mandela Highway.

This will see a project being done in two phases and will include a 1.7-kilometre-long two-lane ramp from the Mandela Highway to Municipal Boulevard, inclusive of a new 120 metre-long bridge across the Rio Cobre.

Making his contribution to the 2021/22 Sectoral Debate in the House of Representatives Wednesday, Minister without Portfolio in the Ministry of Economic Growth and Job Creation, Everald Warmington, said that these would be the deliverables under phase one of the project.

Phase two of the project will see the construction of an overpass of the Dyke Road; the widening of three kilometres of road from Municipal Boulevard (Dyke Road to Grange Lane) from two to four lanes with a concrete median; and installation of street lights, road markings and signage.

“The benefits to be realised by the people, especially those who live or work in Portmore, will include a reduction in travel time from 45 to 15 minutes; an increase in the afternoon peak capacity from 1,200 vehicles per hour to 3,000 vehicles per hour and significantly improved road conditions for people to traverse,” Warmington said.

He noted that the Government will require some of the lands at Ackee Village in order to realise this project.

“The cost for this project is likely to be high, but the Government is committed to finding an appropriate solution for the congestion levels now being experienced by the people of Portmore, especially with the area well poised for exponential growth over the next few years,” Warmington said.