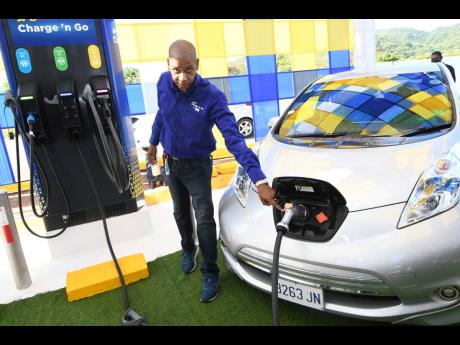 The need for a comprehensive policy on the importation and use of electric vehicles, including their incorporation into the country’s public-transportation system, is impatient of implementation since it is obviously a big part of the future, according to Minister or Science, Energy and Technology Daryl Vaz.

Speaking with The Gleaner during last Friday’s official commissioning of the first public electric vehicle charging station by the Jamaican Public Service (JPS) at the Boot Service Station in Drax Hall, St Ann, Vaz explained that he is working on a definitive policy that is intended to cover every issue relating to electric vehicles. This is essential, he said, as currently, the import duty is a whopping 57 per cent of the value of an electric vehicle.

“My understanding is that the Ministry of Finance has completed its review and is due to take that to Cabinet in short order, so I have the meeting of the council that I am setting up, which is going to guide with the implementation of the fulsome policy,” said Vaz.

The talks will include input from government agencies as well as wider stakeholders such as the JPS; car dealers, including the new car dealers; the Jamaican Gasolene Retailers Association; and others. Vaz explained that he is reaching out to as many interest groups as possible to ensure the greater collaboration.

The Government is also seeking to get its house in order to ensure that its fleets begin the transition from internal combustion engine gasolene and diesel vehicles as soon as possible.

“There is as we speak, some public transportation vehicles that are supposed to come as pilot projects through Minister (Robert) Montague (Minister of Transport and Mining). The Government itself will have to lead by example and, therefore, when the policy is in full effect, the Government will have to follow through in terms of their own procurement of vehicles going forward,” Vaz said..

In respect of training of technicians and mechanics for the electric vehicles, Minister Vaz said there are already several offers on the table that will be part of the council’s deliberations.

“The new-car dealers, through their manufacturers, have a lot technical assistance that they can give as well as the International Development Bank, which is spearheading grant funding for consultancy. So that has to be a major part of training. The dealers are one aspect, but obviously, people will want to import on their own, including used electric vehicles.

“It is not only what we are doing today in terms of the roll-out of this station, but you will have to have a holistic approach to the entry of electric vehicles as you had for diesel and gasolene vehicles, so it very exciting!”

Director of Business Development and the Technical Lead on the JPS’s Electric Vehicle project, Dionne Nugent, said Friday’s roll-out is a demonstration of the ongoing collaboration between her company and private-sector entities to transition and transform not only the energy sector, but also the transportation sector.

“JPS is committed to creating an enabling environment for the sustainable development of the electric mobility sector. So we have taken a bold step to install public charging facilities to encourage all Jamaica to make the shift to electric vehicles as a cost-effective mobility option.”