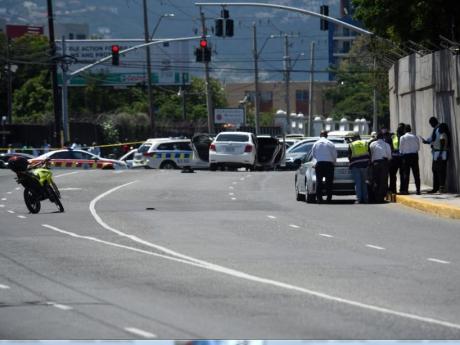 Police and INDECOM investigators at the scene of a fatal shooting along Trafalgar Road, St Andrew on May 10, 2021.

The Independent Commission of Investigations (INDECOM) says it is undertaking a probe into the circumstances that led to the shooting deaths of two men by the police along Trafalgar Road in St Andrew on Monday.

According to INDECOM, there has been some speculation, confusion and inaccuracy in the initial reports broadcasted, which require clarity.

Among other things, there is concern as to how one of the men met his demise and the oversight body says a post mortem will be conducted to determine the nature and cause of their deaths.

Further, INDECOM says it will examine multiple video recordings from social media, private locations, and Jamaica Eye to ascertain the chronology of the events.

It says that a scene examination revealed that at least four vehicles were struck with bullets.

In addition to the suspect vehicle, a police car and two civilian vehicles were hit.

Over 70 nine millimetre casings were recovered from the scene.

​The concerned officers have provided an initial account and will be interviewed by INDECOM in the coming days.

The Independent Commission of Investigations (INDECOM) commenced its independent enquiry into the fatal police shooting incident of two men, which occurred on Monday, March 10, 2021, at Trafalgar Road, Kingston 10, and continues to do so.

There has been some speculation, confusion and inaccuracy in the initial reports broadcasted, which require clarity.

The police reported that upon receipt of information concerning a fatal shooting incident in the Swallowfield community, details of a vehicle believed to have gunmen were transmitted. The vehicle was spotted and intercepted along Trafalgar Road, where three officers initially confronted the occupants.

During that encounter, gunshots were fired.  The details of the circumstances of the discharge of weapons are under examination.

Multiple video recordings from social media, private locations and Jamaica Eye will be examined by INDECOM to ascertain the chronology of the events. The commission awaits access to view some of the material.

INDECOM can confirm that two men were shot and killed arising from the police intervention.

These men are reported as still being unidentified.

A third man escaped from the scene.

INDECOM can report that one of the three men from the suspect vehicle ran into a nearby apartment complex, Abbey Court.

That man, dressed in blue jeans and a dark camouflage t-shirt, was handcuffed within the grounds of the complex.

He was then placed in the rear section of a police vehicle, which then drove away from the scene.

The arrested man is one of the two deceased.

A post mortem examination will determine the nature and cause of death of both men, which includes the driver of the suspect vehicle.

The scene examination reveals that at least four motor vehicles were struck with bullets.

In addition to the suspect vehicle, these included a police car and two civilian vehicles.

One civilian vehicle was struck once to the rear windshield, the other at least five times to the rear.

The police vehicle received at least five bullet strikes to the front.

​The concerned officers have provided an initial account and will be interviewed in the coming days.

* ​A review of the Jamaica Eye footage as well as other CCTV evidence available to understand the series of events which resulted in death and damage to property.
* To determine the number of persons who were travelling in the suspect vehicle and their chain of custody.
* To seek any witnesses to either the initial police encounter or the subsequent arrest of a man in Abbey Court.

Do you have information?