McKenzie out on a limb 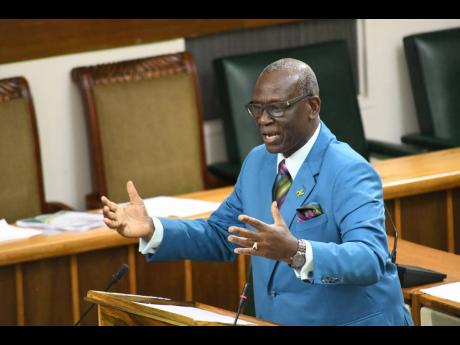 Howls of denials by Local Government Minister Desmond McKenzie that no political interference or ministerial overreach was at play at the Office of Disaster Preparedness and Emergency Management (ODPEM) were rubbished last week after the contents...

Howls of denials by Local Government Minister Desmond McKenzie that no political interference or ministerial overreach was at play at the Office of Disaster Preparedness and Emergency Management (ODPEM) were rubbished last week after the contents of an April 20, 2021 letter outlining the corporate expectation of the body to the ministry triggered another firestorm.

The letter, signed by McKenzie and addressed to Chairman Joy Douglas and which has filtered among staffers, has left many persons fuming, labelling it as “just a codification of high-handedness happening for a long time, but which has passed offensive state”.

The letter was dated the same day of the first meeting of a new board.

Exactly one week later, then Director General Leslie Harrow informed the board that he would be returning to his substantive post at the Electoral Office of Jamaica (EOJ), ending his secondment to ODPEM.

On May 4, The Gleaner reported that Harrow had left the organisation due to what sources cited as “political interference”, a claim he later denied.

Richard Thompson, who is in his third acting stint, is to be replaced shortly “for a director three tiers below him”, The Sunday Gleaner was told last week.

In his Sectoral Debate presentation last week, McKenzie also denied interference, but staffers listening keenly were even more upset, citing “ministerial edicts and high-handedness, plus the nepotism and cronyism at the entity”, said the well-placed Sunday Gleaner source.

McKenzie’s letter indicated key actions required of the agency and gave 15 general objectives. Under engagement with ODPEM, the final requirement lit one of the fires when the body was told to “advise on any significant media or reputational issue”, which staffers said represented a gag order on the entity, which had been in place even before it was put into writing.

Under subheading ‘Reporting and Work Plans’, the letter said that the minister must be informed “… of any significant changes to budgets, corporate or operational plans and/or timelines in timely manner”, although ODPEM’s budget comes from the finance ministry.

“… I expect ODPEM will develop a constructive relationship with the permanent secretary and facilitate its engagement on major policy, program[mes] and service issues for which ODPEM is responsible, including any new initiative arising from election commitments …,” read a section of the letter, which left staffers dismayed that the entity was being asked to facilitate election promises.

Questions have also been raised about the selection of individuals to work on a billion-dollar Japanese government grant-funded project, which should have been completed early this year but had fallen behind schedule since 2018.

In published reports in 2017, the government of Japan said it would contribute $1.6 billion to Jamaica’s communication capability before, during and after a disaster. The grant funds would be disbursed over four years and it would be used to procure equipment and other inputs to improve the emergency communication system.

Facilitated through negotiations with the Japan International Cooperation Agency, it would be executed through ODPEM and would provide a platform for communication among critical government agencies, first responders, major stakeholders and auxiliary and localised services.

“The project engineer and project manager were hand-picked by the ministry and the project is still way behind to the point that Japan is being asked to extend it with COVID as the excuse, but it has been behind since 2018. I have been told that the ministry is still calling the shots, dictating how the money is to be spent, even after the Ministry of Finance told them it is to be run by ODPEM,” said the Sunday Gleaner source.

The source said the project has fallen well behind schedule and the grant funds may have been halted, which necessitated the finance ministry to allocate $375 million in this financial year for the Improvement of the Emergency Communication System in Jamaica project to be implemented by ODPEM, the same things the Japan funds were earmarked for.

It is not known how much of the Japan funds have been disbursed and embassy personnel asked for time to provide responses at a later date following consultations.

Two former heads of the agency and one minister told The Sunday Gleaner that during their tenures, they were never required to seek clearance from the parent ministry about the work of the organisation, its relationship with the media nor budgetary management, but out of courtesy, it would be informed.

“I cannot recall neither media nor budgetary dictates from any minister or permanent secretary while I was there and I have served with at least two ministers. We held regular briefings, weekly briefings, so there was no secret about what was being done. But certainly no minister, board or permanent secretary could dictate – or dictated to us – about the day-to-day operations,” said Dr Barbara Carby, who served as director general for more than 10 years.

While at the ODPEM, she was credited with placing risk reduction on Jamaica’s national agenda and pioneering the development of a national mitigation policy and hazard mapping programme. She also became the first director of hazard management for the Cayman Islands.

Her comments came after the contents of the letter were read to her last week, following which she said she would have been “extremely uncomfortable” if the board or minister interfered in the day-to-day running of the entity.

“Obviously, a minister must know what is going on in his/her portfolio of responsibility. So the system of monthly board meetings was in place and we would report to the ministry through the accountable officer, which is the PS (permanent secretary). But in terms of a minister giving a to-do list, I have never heard that before. I have never been told to seek clearance for press releases,” said Carby.

Ronald Jackson, who served between 2006 and 2013 before serving seven years as executive director of the Caribbean Disaster Emergency Management Agency, also expressed surprise.

“During my time of serving successive administrations, I didn’t receive any such directive and we were able to speak to the media about our media campaigns and hazard risks, etc,” said Jackson, who is now Switzerland-based and heads the Disaster Risk Management Team for Building Resilience in the United Nations Development Programme in Geneva.

“We had a board with a finance and audit committee. We were audited by the auditor general and I believe we had independent audit … . Further, we had to file quarterly reports to the contractor general,” he told The Sunday Gleaner.

Former Local Government Minister Noel Arscott said he issued no such directives to the ODPEM board.

“Why would I want to tell them how to run the place? You have a body in place with competent people, and plus you have a board. And there were monthly meetings with them and the prime minister. ... It’s crazy. Why would I want to know about an ODPEM press release?” Arscott questioned last week.

“For these things to be stated, the minister must have some grave concerns about the entity or he is directing the day-to-day operations,” Arscott theorised.

Commander John McFarlane served as head of the agency which was forerunner to ODPEM – the Office of Disaster Preparedness and Emergency Relief Coordination – 1985-1989. Former Prime Minister Bruce Golding headed the then parent ministry of the entity.

“We worked very closely with the ministry and PS at the time. In terms of policies and practices, we were given very clear directions as to what the Government wanted to achieve. We were accountable, but I can’t say there was any direct interference. In fact, no interference. The closest time we came to any directives was during Hurricane Gilbert in 1988 and that was understandable, given the personality that was Mr [Edward] Seaga (then prime minister),” recalled McFarlane.

McFarlane served alongside Carby as the organisation changed face over the years.

He did not find anything adverse in the letter after it was read to him.

“Even during Gilbert, the directives were more about policies, but I don’t have any adverse reactions to the letter at all. The letter is written to the chairman, and there is nothing that I have heard that indicates to me that the minister is going to be dipping his fingers into the day-to-day operations,” he explained.

Parliament’s Public Administration and Appropriations Committee (PAAC) has requested that ODPEM make an appearance on June 2 to address the general state of accounts as well as proposed and actual expenditure for the current financial year. The PAAC is also interrogating the entity’s systems and processes that enable service delivery, and any challenges therein, and seeking an update of the agency’s projects to deal with natural disasters as the June 1 start to the hurricane season approaches.